Hard to believe its been close to four months since I announced my blogging retirement.  I do miss it, but the work reasons I cited for leaving are still very much present.  With that being said I figured I do one of those back to school things where I talk about my summer.  It will also help the blog from becoming totally dormant when/if my current schedule changes. 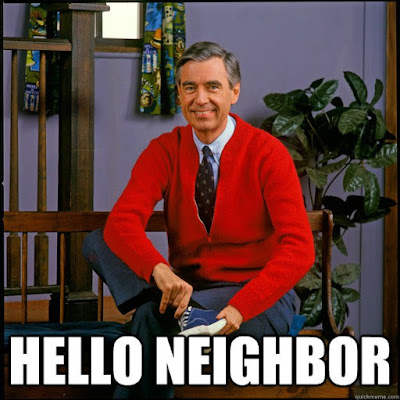 Most of my hobby time over the summer was spent organizing.  I got the majority of my WVU collection in binders which like any organization project took ten times longer than I hoped.  Initially I figured it would take 5 binders, but quickly figured out about 3 times that was needed.  I have way too many Steve Slaton cards!

I'm in preliminary stages of planning out my Pirate organization project.  I feel like I'm going to need several industrial engineers on retainer. Right now my thinking is getting long term Pirates like Cutch, Marte, Neil Walker and Jason Bay in binders while organizing monster boxes for shorter term guys.  Time will tell.

New arrivals into the collection have been WVU dominated.  2018 was an odd year for Pirate releases. Checklists continued to be dominated by the likes of Gregory Polanco and Starling Marte.  While I like collecting each guy, I'm more than set on having a nice rounded out collection of each.  Just type in Starling Marte in trading card database.  SO MANY CARDS!

In some ways its kind of a throwback to the early/mid 2000's when most of my new additions were retired players. 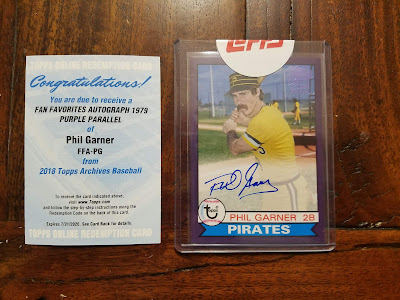 I bought this redemption not long after Archives released.  This has always been a nice way to save a few bucks over the years.  As I expected, the turnaround was very short so the gamble paid off. 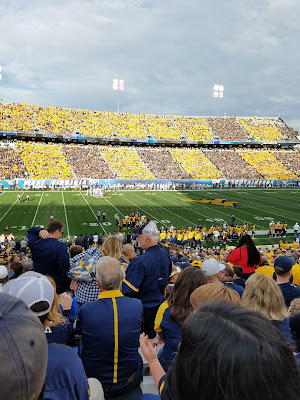 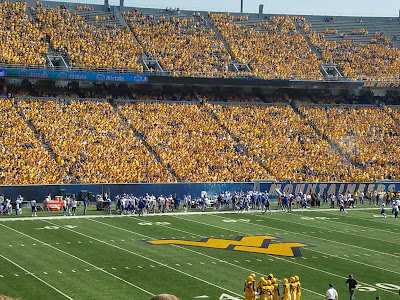 As the summer ends in Morgantown everything shifts to football.  While football will never be a favorite sport for me I do enjoy this time of year.  I live within walking distance of the stadium so our house becomes somewhat of a meeting ground for all my out of town friends during home games. 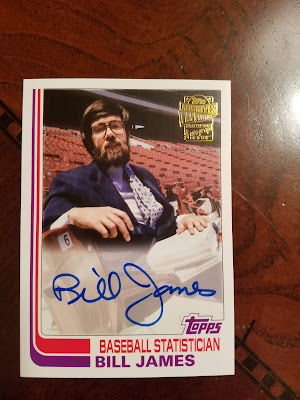 As usual with most of my posts over the years I just throw a bunch of pics with complete disregard to timing and subject matter.

I rarely buy non core collection stuff these days, but made an exception for this Bill James auto. 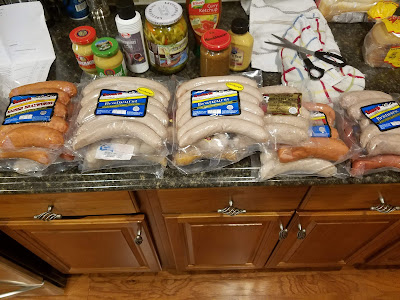 Four years ago my wife and I decided to have a combined birthday celebration in which we hosted a few friends for an Oktoberfest themed tailgate. Fast forward to present day and that celebration has blossomed into a huge party which we had close to 60 people over.  The sausages were direct from Wisconsin.  Its a good bit of work to pull this party off now, but we love it. 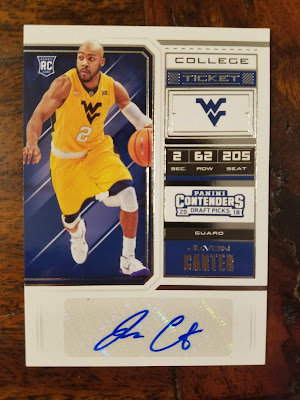 As I mentioned above, the WVU collection has taken center stage since my retirement.  The fact that former WVU point guard Jevon Carter actually has cards is a big deal.  I enjoy college basketball a ton so I'm glad I'll have something to look for besides straggler Joe Alexander and Devin Ebanks cards. 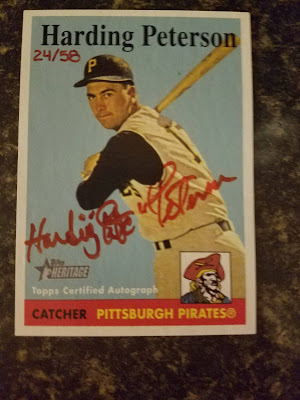 The obscure retired autos from Heritage can be tough to find and expensive.  I've been trying to dig up some stragglers that I've missed over the years like this Harding Peterson. 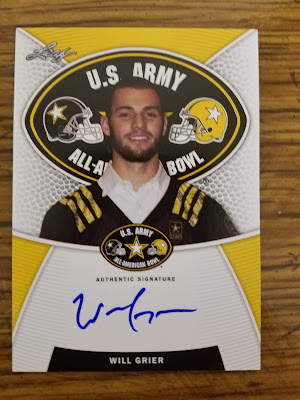 Back in the early summer I picked up a handful of Will Grier cards from the Leaf Army set knowing they would be too expensive once the season starts.  I'm glad I did. 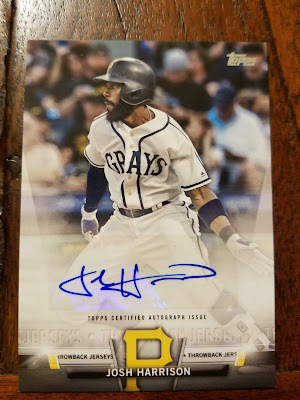 One of the few 2018 cards I picked up.  Loved the Homestead Grays uniform pic too much not to buy it. 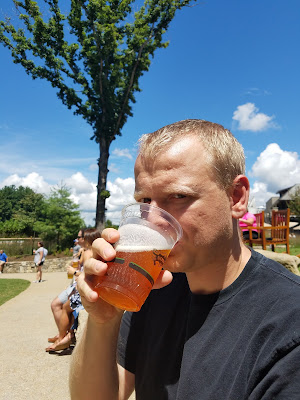 I went to Asheville NC in August.  If you like craft beer I highly recommend a visit.  They have almost 40 breweries within the city limits. 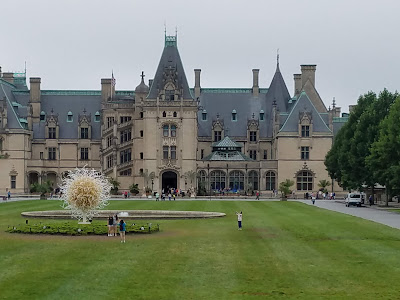 Asheville is also famous for being home to America's largest home, the Biltmore. 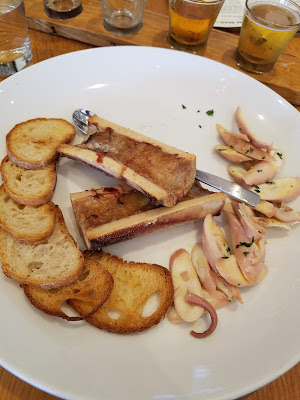 With so many breweries in Asheville you have to do things to set yourself apart.  Of course having great beer is always number 1, but good food is nice too.   This was dubbed Spanish surf and turf featuring bone marrow and octopus. 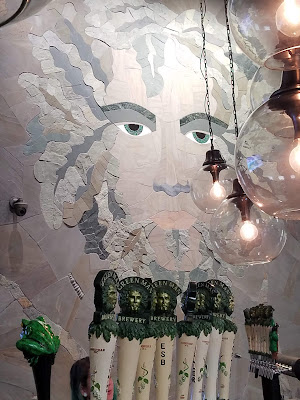 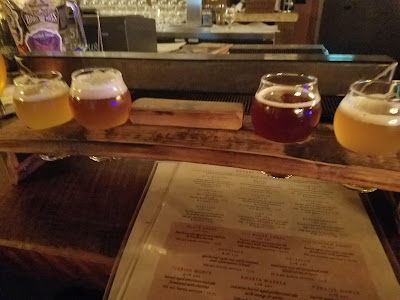 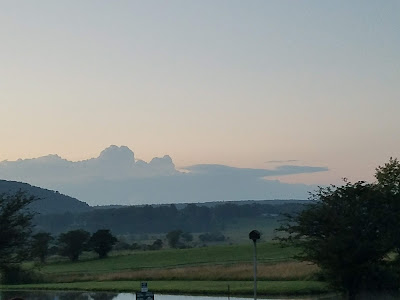 This is a shot of Canaan Valley in WV. 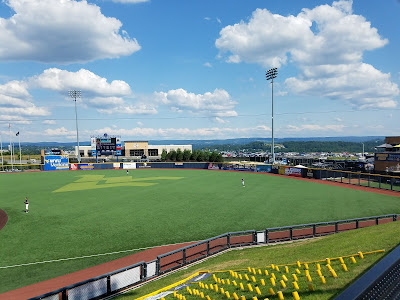 Cool shot from a Black Bears game in Morgantown.

So, while I'm not blogging I'm still very much involved in all my usual shenanigans.  At the very least this might help reduce the amount of Viagra and "make money at home" comments on my old posts.

Hope everyone enjoyed summer! For those still lucky enough to have their chosen baseball teams still actually playing, good luck!


Posted by BobWalkthePlank at 1:29 PM