Being a Pirates fan is once again cool in Pittsburgh.  With the recent playoff run and the emergence of Andrew Mccutchen as a bona fide superstar things are looking up for the Pirates. I was lucky enough to attend the Wildcard game against the Reds and it was one of the most memorable sporting experiences that I've witnessed.  The game had the feel of a European soccer match.  Fans were chanting and waving flags the entire game. 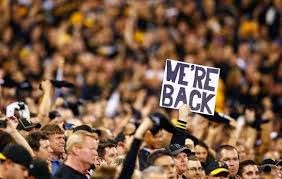 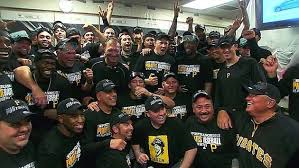 One of the reasons the 2013 season was so sweet was the historically long wait in between playoff appearances.  Pirate fans had to endure the longest stretch in professional sports history without a playoff game.  Being historically bad alienated a whole generation of Pirate fans until this group of players had a magical summer and slowly regained the love of the city.  Fans showed up at the games in numbers not seen since PNC Parks first year.

Living close to Pittsburgh allows me to attend 10-15 games a year.  This year my friends and I would often discuss how far this team has come.  We would talk about how we could get lower level tickets for 5 dollars and how the team would cease to exist once Steeler training camp would begin.  The so called dark ages of Pirate Baseball left very few positive memories.

One memory that holds a special place for me was being able to attend the 2006 All Star game with my brother.  The NL was represented by both Jason Bay and Freddy Sanchez.  I think if you ask any Pirates fan from the mid 2000's they would all hold a special fondness for Jason Bay.  He was my personal favorite Bucco.

Jason Bay was acquired in the Brian Giles trade and hit the ground running for the Bucs.  He instantly became an All Star level player and the face of a franchise in the mid 2000's. Recently I read that Jason was going to retire so I wanted to post one of my favorite cards.

The above card is from 2006 Topps Triple Threads and is serial numbered 3 of 9.  I think being placed on a card with the likes of David Wright and Miguel Cabrera shows just how productive Bay was in his prime years.  It is too bad injuries derailed his career.

(Via my good pal Micah White who is also a diehard Pirates fan.)

Last March, A.J. Burnett said, "If I was to keep playing, I wouldn't want it to be anywhere else but Pittsburgh."  10 months later, that may no longer be the case.  It appears that Burnett will continue to keep playing in 2014, but if it is in Pittsburgh, it will likely be because the Pirates offered him the best deal.  And, as any long time fan of this club will tell you, the chances of the Pirates paying market value or above for any free agent are pretty slim.  If Burnett does land elsewhere in 2014, there are sure to be hard feelings among many Buccos fans, and in some ways, it will look as if he did go back on his word about only wanting to be in Pittsburgh.  However, the Pirates didn't exactly show a great desire to keep A.J. in the 'Burgh when they declined to make a 14.1 million dollar qualifying offer which could have made Burnett's decision easier.
So, did the Pirates make a mistake by not making that qualifying offer?  Last year, Burnett's 209 strikeouts led all free agent starters, and placed him first in K/9 rate.  For the more sabermetrically inclined, his 2.80 FIP and 2.92 xFIP were also tops.  While his 4.0 WAR trailed only James Shields and Jon Lester.  Not to mention that Burnett led the Pirates in all these stats as well as innings pitched.  Shields' and Lester's club options were both picked up for 12 and 13 million respectively, and both are considerably younger than Burnett.  But, we have also seen Hiroki Kuroda, who is one year older, sign a one year 16 million dollar deal with the Yankees.  Given his age and comparable, if slightly less impressive, stat line last season, Kuroda might be the best comparison to A.J. this off season.  And while it's impossible to guess what he will ultimately receive, I think it's safe to say that 14.1 million is easily within the range of market value for other comparable free agent starters. 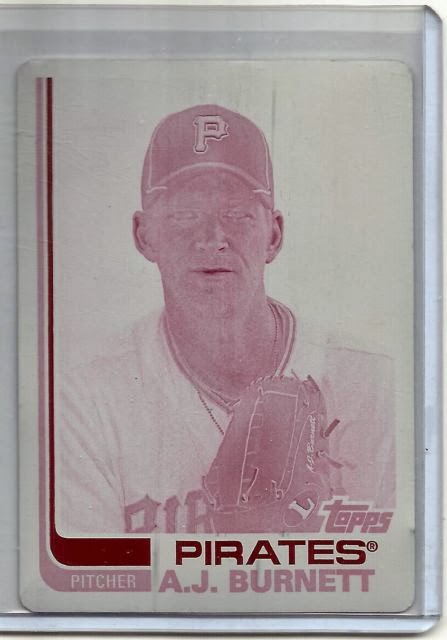 I'm not usually a fan of printing plates, but A.J. does not have any Pirate related relics or autos on the market.  This printing plate is from Topps Heritage and cost less than $10 on EBAY.
Posted by BobWalkthePlank at 8:49 AM 3 comments:

The above card was purchased on Ebay last year.  Pedro doesn't have a ton of high end relics or autos.  Probably the nicest cards were from Museum Collection like the one above which is numbered out of /5.  I have a nicer version of this one, but didn't have it scanned.
Posted by BobWalkthePlank at 1:07 PM No comments:

A Work in Progress

My name is Matt and I'm a diehard Pittsburgh Pirates and West Virginia Mountaineers fan.  I've been collecting cards my whole life and have accumulated thousands of game used and autographed memorabilia.  My goal in blog world is to meet other card lovers and establish trade partners.  I'm working on scanning my collection to sportscardalbums.com to have a visual guide to what I have in my collection.  Feel free to drop me a line as I love to talk cards and sports in general.  Let me know what you like to collect and I can start picking up stuff.  I have a few friends who collect so I might be able to find something you like or need.

The card above was picked up on Ebay before the holidays and is numbered to /25.  It is from 2013 Topps Update.   The set had lots of Pirates in it including many All Star variations.  I'm currently looking for the Jason Grilli jumbo patch and jumbo patch auto.  Each is numbered out of /6.  ﻿
Posted by BobWalkthePlank at 10:17 PM 1 comment: