Neil Walker Great at Nothing Good at Everything

I'm a frequent watcher of the MLB network and one of my favorite offseason features is the top ten at each position.  Last weeks feature was 2nd base, and Neil Walker was 8th.  The rankings are based on past performance/upcoming projections and weighs defense and offense.  My first instinct was that I could name a lot more than 7 second baseman I would rather have than Walker, but that proved to be more difficult than I thought.  He is so average he is good.

When looking at his numbers you see a good obp with a rising walk rate, decent pop (13-17 homers a year) all while continuing to improve his defense.  Really the only flaw in his game is the ability to stay on the field.  He has had DL stints each of the past two years.  A healthy Walker is vital to the Pirates success as middle infield depth has been a weakness the last couple of years.

Would Neil Walker be in your top ten? 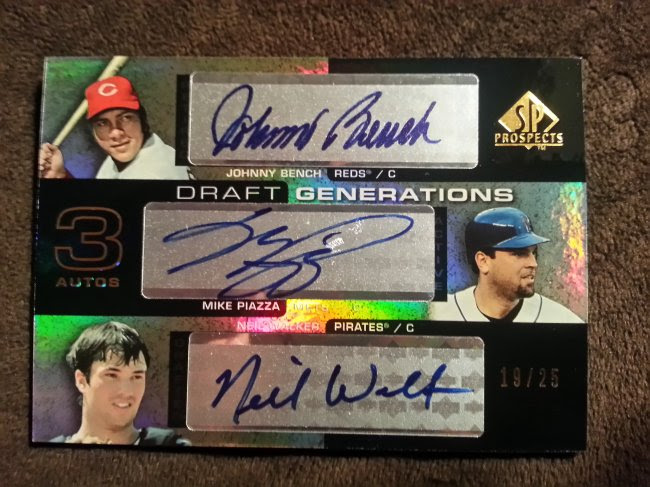 Neil Walker was drafted out of high school as a catcher back in 2004.  Pretty cool company on this card.  This is from 2004 SP Prospects and is serial numbered 19/25.
Posted by BobWalkthePlank at 11:37 PM