Hey Folks!!!  Hope all is well in blogging land.  Figured it was about time to do a proof of life so my blog doesn't disappear.

Everyone managing to find cards over the past year?  About 95% of my new cards are stuck in COMC shipping purgatory.  I finally bit the bullet and requested shipment this week...

*Someone had posted the above gif on Twitter....It really is the perfect gif for the situation.

As you can see, I'm going to be waiting until at least the fall to get these.  Right now the anticipated arrival date is November.  I have mixed feelings about everything.  COMC still remains one of the best pipelines for my WVU and Pirates collection as I buy a lot of $1-$5 cards.  In that range you get killed with shipping on eBay so you have look elsewhere.  Hopefully one of these years COMC fixes all their issues.  I thought being patient would in the long run benefit me, but lead times continue to be at least 4 months.  As you can see on the Twitter comments many people are suffering similar fates.  At this point I just hope they send me the right cards.

I continue to be amazed at the retail card rush.  Fortunately as long as you don't collect football and basketball, supply is starting to become available online at Target.  I've managed to get some Series 2 and Stadium Club over the past few weeks.  Normally I don't care about retail boxes that much, but my trade fodder was pretty much depleted in early 2020.  It was kind of funny to look back at a January 2020 order on my Target account that included prizm football, contenders basketball and Topps Chrome baseball.   Simpler times....#fliplife

This was an exciting pull from my Series 2... 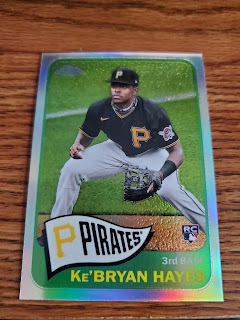 Up until this year it really wasn't "worth it" to buy blasters if you collect Pirates over the last handful of years.  Most singles could be had for little to nothing via a Cardbarrel order or a team break.  With the emergence of Ke'Bryan Hayes it has made the normal means a bit expensive so throwing down a little cash on the retail lottery can actually pay dividends if you get a couple base Hayes cards or even better if you get a fun parallel like above.

I'm not a sky is falling type of person when it comes to cards, but I do believe at some point base rookies of star players will plummet to more normalized prices.  Grading and the Trout Update rookie has everyone looking for the next big thing.  When a card has tens of thousands in population as a "10" it really can't be worth that much. 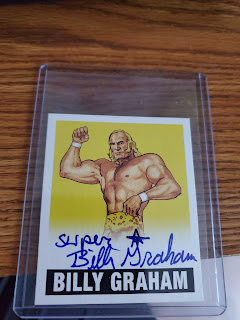 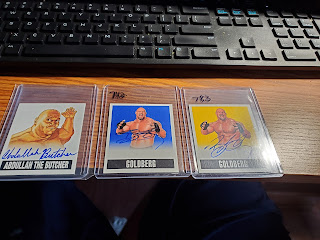 One of my side card projects has been the Leaf Originals wrestling autos.  It was something that started by sheer chance when I came into a big lot in 2019 that included a lot of the higher end ones.  It's been fun trying to fill in the gaps when other PC's have been hard to find good deals.  The checklist is fun and has a lot of guys who don't have much in way of major card releases. 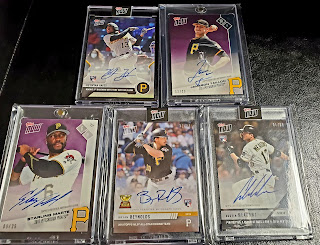 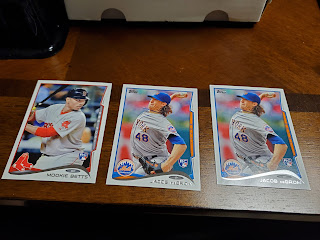 Pirate issues of Topps Now is about the only thing I actively try to get every release.  Fortunately the Pirates haven't had many autos.  The Hayes was the only truly "expensive card."

Like most long time card collectors during Covid times I continue to do deep digs into old boxes.  Not surprisingly you run into lots of Update rookies.  Only a matter of time before some bigger names popped up.  It still boggles my mind that people pay such high amounts for these cards. 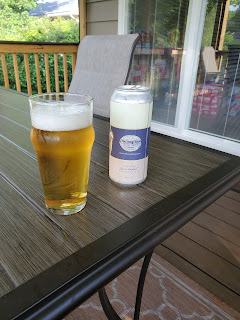 One of the major projects over the past year was to have a complete overhaul of our back deck area.  The completed project is now a screened in porch area in which I put a tv to watch my Pirates march to a last place finish.  Need plenty of beer to make it through a broadcast.  I guess the silver lining is that the Pirates will have all kinds of interesting prospect cards the next few years.

Hope everyone is doing well.

Posted by BobWalkthePlank at 1:23 PM