I don't mess around much with Bowman parallels other than some refractor autos I have in my collection. While I'm not as much against parallel cards in general as some, I do think too many exist. Since so many exist I base my purchases on which parallels I find the most visually appealing. My favorites are the Topps acetates/clear cards that are numbered to 10 and the silver frames /20.

With that being said I will pull the trigger if the price is right. Such was the case with this AJ Burnett. 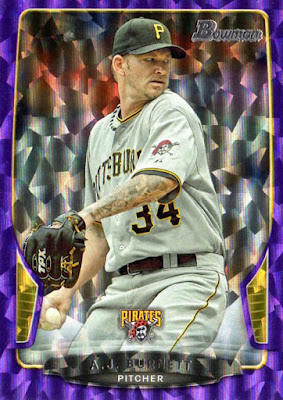 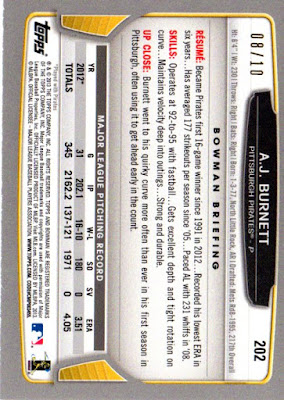 AJ still doesn't have a ton of Pirate cards. This makes finding some of his more limited releases tough as prices can be high. Thankfully I ended up spending more on shipping than the actual card itself ($2.25 + $2.99 shipping). Seemed like a reasonable price to pay for a card numbered to 10.

On a personal note I'm not the biggest AJ fan. He has been great for the Pirates, but something about him rubs me the wrong way. Must be his demonstrative style on the mound. He has an ultra competitive personality that sometimes can go a bit overboard when you can tell he is pissed at one of his teammates for not making a play. He is in the same mold as a John Lackey and Chris Carpenter. They just seem like miserable pricks on the mound.

I don't really let this personal bias effect my collection. The Pirates have had some well documented assholes over the years with the likes of Brian Giles and Jason Kendall coming to mind. Both are well represented in my collection.  For all I know Cutch and Gerrit Cole could be huge assholes. I don't know these guys personally all my opinions are based on what I see on the field.
Posted by BobWalkthePlank at 7:14 PM