Last summer I opened the most boxes I had since the mid 2000's.  This was mostly due to the fact that I was recovering from surgery and it helped with the boredom. One set that went on super sell during that time was 2014 Donruss. Around the time of the 2014 National I believe Dave and Adams had a sale in which boxes were marked all the way down to the $40 mark. I opened a ton.

Since I opened a ton, I obviously accumulated a ton of cards.While a tough set to complete, the shear volume that I opened pretty much gave me a master set. A few eBay lots here and there helped cap off the base short prints and the majority of the remaining insert sets.

In terms of autos I decided I would give that set a run as well. The checklist was void of guys like Trout and Harper so I figured it was worth a shot. Each box yielded at least 2 autos so I was able to get a bulk out of the way quickly. Here is the checklist....

When I first decided I was going to go for all of them I knew some would be tough. The Hamilton, Marte and Gattis were redemptions and at the time of release Bogaerts and Taveres were sought after rookies.

I got lucky by pulling Boagerts, Taveras and Marte. Gattis and Hamilton were purchased off of eBay. Thankfully all three redemptions were executed by the player. I thought the rest would be smooth sailing......I was wrong.

Donruss didn't announce any official short prints, but you could see some shaping up over time. After some investigation it seems that at least 4 players were sp's (Glaus, LaRoche, Castellanos and Familia). This set has been saved in my eBay searches for over a year and I had never seen the LaRoche and Familia and only 1 a piece of Glaus and Castellanos.

Thankfully patience paid off last week when the Troy Glaus hit eBay. A few other people must have known this card was an sp as my winning bid was $15. Glaus autos usually sell for much cheaper. I probably would have went much higher so $15 was a small price to pay for a years long wait.

So as of now I'm only 3 cards short from completing the set, but who knows when they may show up again.

While these cards are not numbered my assumption is that they are rare. To not see something for over a year in a set in which a lot of people opened makes me think less than 20 were produced. 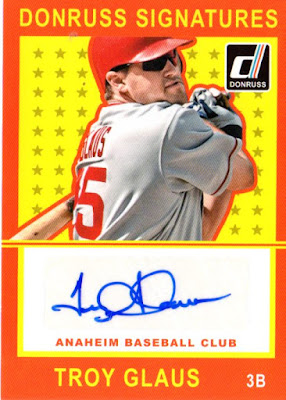 This will be the last time I try completing something like this. I don't consider myself a set builder so this pursuit is way out of my comfort zone. Obviously I'm in too deep with this set now to scrap it, but it just isn't as fun as finding a random Pirate I need.

Posted by BobWalkthePlank at 3:50 PM