Being a fan of a team that had no chance of doing well can wear on you. During the Pirates historic run of 20 plus years of being awful it created two types of fans. You had the internal optimist fan that was always thinking the team was turning the corner and the fan that just watched out of habit because the team was part of their childhood. I consider myself the optimist fan, but realistic at the same time.

Even as an optimist, the Pirates were so bad that you had to find other means to channel your support. Maybe you could root for some prospects or just use the Pirates as a cheap means to see some dominant NL players visiting PNC park. For the longest time guys like Sosa and Pujols were among the offensive leaders in the early years of PNC park.

One event that always peaked my interest in the summer was the All Star game. While being terrible for 20 years means your team had plenty of holes it doesn't mean the Buccos were completely void of talent. Jason Kendall, Brian Giles and Jason Bay all had multiple years where they were more than deserving. With that being said the Pirates had a few years where guys had to be put on the squad just because it was the rule. The likes of Ed Sprague, Mike Williams and Evan Meek come to mind.

It terms of cardboard it made perfect sense to chase All Star related Pirates. Topps has made made it a habit to produce jersey cards since the mid 2000's featuring All Star game swatches. When Triple Threads was introduced it took them to a whole new level and I was hooked.

I've shown off a few here on the blog like these.... 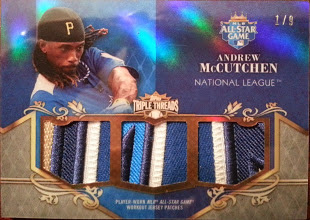 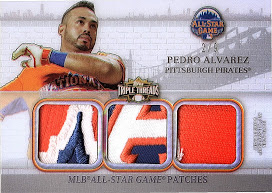 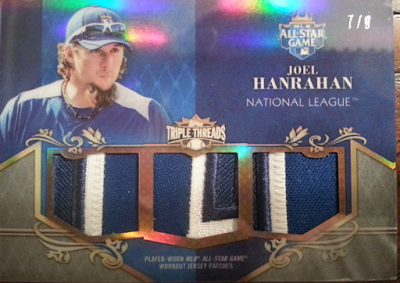 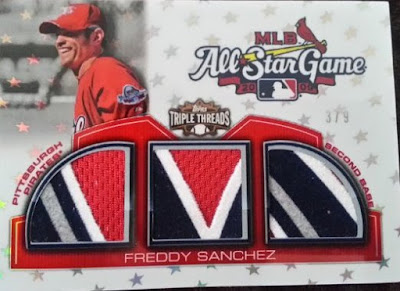 Over the past handful of months I've been able to add a couple more that I haven't had time to showoff.... 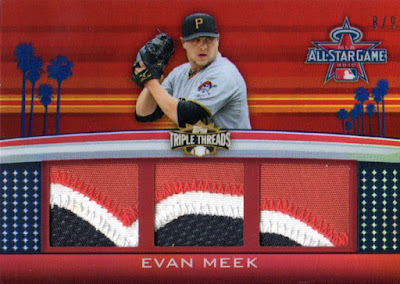 You know your team is pretty bad when you only get one representative and it happens to be a reliever. That was the case for Evan Meek. He had a decent year, but it was just a case of a reliever beating out his peripheral numbers. 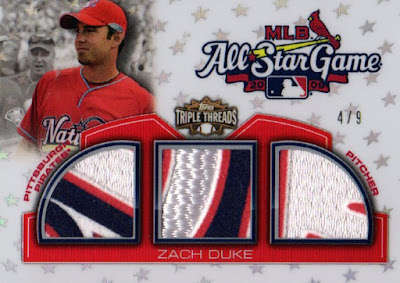 Zach Duke made the All Star team with rather pedestrian numbers. Without looking I believe he was added late as Freddy Sanchez was already on the team. He would go on to fall apart the second half of that season. His career was in jeopardy because of prolonged ineffectiveness, but he has rebounded as a productive lefty reliever.

Adding both of these patches were just as rewarding as adding the bigger names. Guys like Cutch can always be found if you are willing the shell out the cash. Duke and Meek are bought up by team collectors never to be seen again because resell value is limited.


Posted by BobWalkthePlank at 7:37 PM