Tomorrow I'm flying to San Antonio for work so in turn I was in the office most of the day today trying to tie up some loose ends before I hit the road. Not the best way to spend the holiday, but I'm glad I did it because otherwise I would be digging out of a hole for two weeks once I'm back.

As far as the trip goes I'm pretty excited to head back to San Antonio. I spent a week there when I was in high school so I've accomplished most of the touristy things. Have a pretty open slate so I might just walk around and try to relax some. Anybody been recently? I'm open to suggestions. 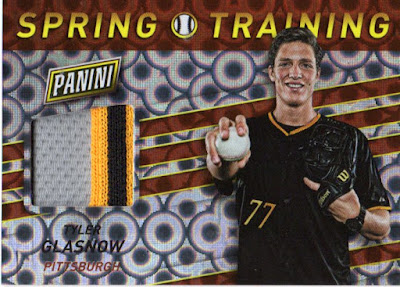 I've bid on some of the Father's Day cards over the past couple of years, but fell short on most. For some reason this card only sold for .99 plus shipping. The card is actually not numbered, but according to the seller this card is considered the pyramid parallel, thus it is out of 10. I didn't bother to check to see because the price was so good either way. Panini has been releasing a ton of Glasnow cards so it has been fun picking up a few here and there.

Their were some rumblings that the Pirates might call up Tyler Glasnow, but it is looking like he will stay down in the minors. His numbers are very good, but he can struggle with command at times. He'll have a chance to crack the rotation next year in Spring Training, but the odds are he will find his to Pittsburgh in June because of service time.

Hope everyone enjoyed the long weekend.

Posted by BobWalkthePlank at 11:17 PM