Before blogging, I had a limited knowledge on oddball baseball cards. Most of my memories were of Denny's hologram cards and Sports Illustrated for Kids. I just never really grasped how many cool oddballs existed.

Shortly after starting Bob Walk the Plank I quickly realized that the oddball card market was vast. You could be in for a life's adventure by just tackling weird releases of your chosen team. Soon enough I began receiving oddball after oddball in trades. This allowed me to get a nice base of what was out there.

While searching for some older Jack Wilson cards I came across this little gem. 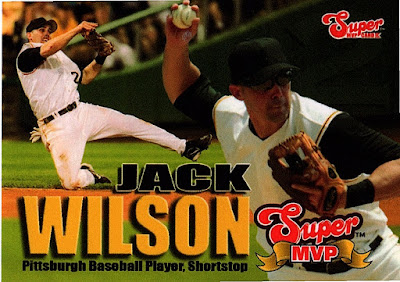 Super Bakery is co-owned by Franco Harris and produces healthy pastries. In 2007 they came out with a Jack Wilson themed release. The above card was associate with that release. 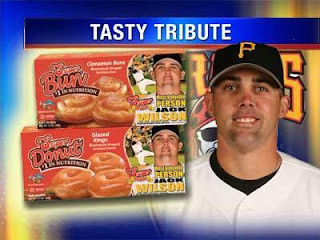 I wasn't familiar with Super Donuts, but it seems they have kind of a cult following. For years they distributed just to schools and regional grocery stores, but have recently begun distributing all over the US. Part of me wants to order a case and see what a healthy donut tastes like.