The last few months have been extra enjoyable when it comes to adding cards to my collection. Don't get me wrong I love all my cards, but my most recent additions have added an extra sense of accomplishment. After several years of new releases featuring an abundance of Pirates, 2015 has things coming to a screeching halt. In turn, I've been spending most of my time chasing some overlooked cards in the 2000's.

Some cards I'm specifically chasing, while others I randomly come across by searching by player. Here is one of those random cards. 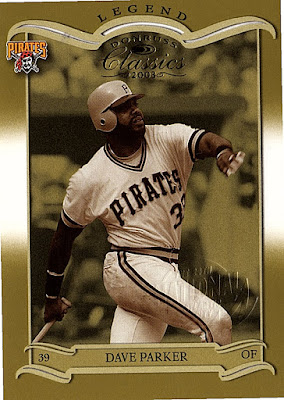 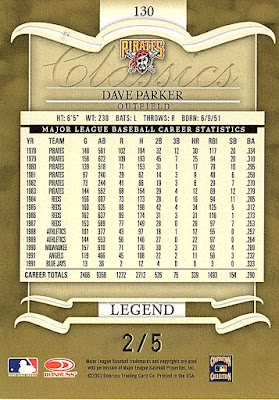 I was aware that the Atlantic City National parallels existed, but never had come across the Dave Parker. Sometimes random late night eBay searching can pay dividends.

My understanding that the only way you could originally get these cards is by opening a certain amount of Donruss packs at their booth during the convention. You were then given a special parallel numbered to /5 of one of the base cards from the set.

The card only cost me $4.50 which seemed more than reasonable for such a rare parallel. As I've stated on here before, Parker is a great guy to collect as he is very affordable.

Remember to check out my contest here.

Thanks for reading!
Posted by BobWalkthePlank at 8:19 PM