Johnny Sends Me Everything.

My wife is pretty accustomed to my blogging ways. She knows that the majority of items I receive in the mail are from trades and not me spending away our savings. At most I may get a comment such as "you get a lot of mail" but for the most part she just shrugs and moves on. I think my war with JBF weathered her because no amount of mail can really phase her. 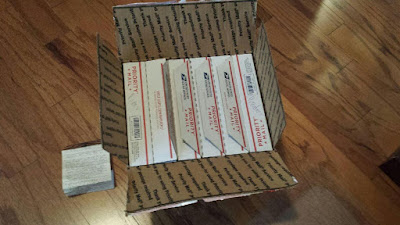 Such was the case when I got this monster from John Miller of Johnny's Trading Spot. All my wife said is "one of your blogging friends sent you a gigantic box."  I guess now I can just buy tons of cards and my wife will just assume it is trade.  "Your friend Dave and Adams just sent you 10 boxes."

Kidding aside this box was a monster. John did warn that only two of the priority boxes contained Pirates and the others were for me to get distribute how I see fit.  I put those aside for sorting down the road.

John warned me that some might be doubles, but guaranteed they would be more fun then a repack. Boy was he right. 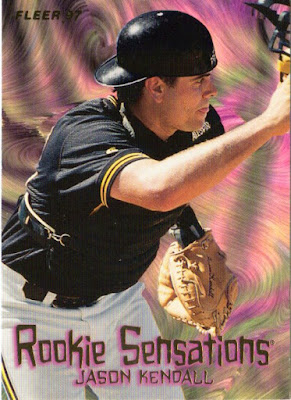 If you collected the Pirates in the mid to late 90's your collection is full of Jason Kendall, Brian Giles and a bunch of failed prospects. As most of you know I love cards from this time period so seeing this trippy Fleer Kendall made me very happy. 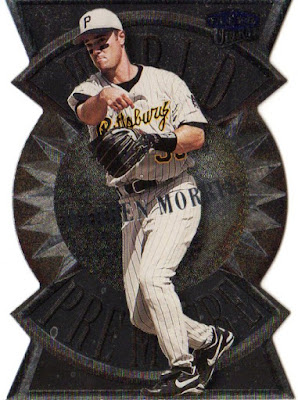 Warren Morris peaked before he even got into professional baseball. He hit a walk off homerun to win the college world series while at LSU.  He had a pretty good rookie season in 1999, but that was about it. 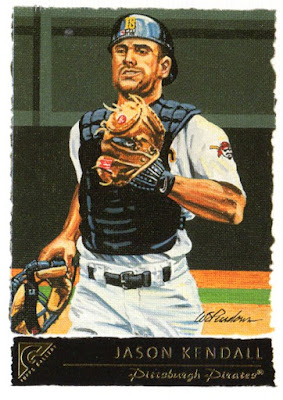 Topps Gallery is so classy looking! 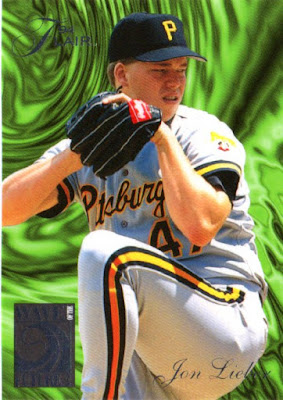 More 90's goodness. Jon Lieber is in the Matrix! 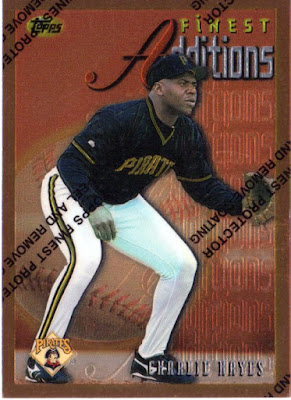 Charlie Hayes only spent part of one season with the Buccos so it is always cool when I get one of his cards. 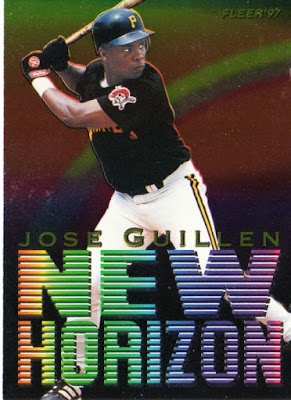 Jose Guillen was a prized prospect, but never quite panned out to be the star everyone thought. Some people blame this on the Pirates calling him up way too early and then optioning him back and forth to AAA on a regular basis. 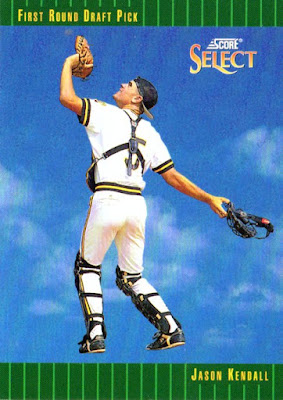 One of my favorite Kendall cards. 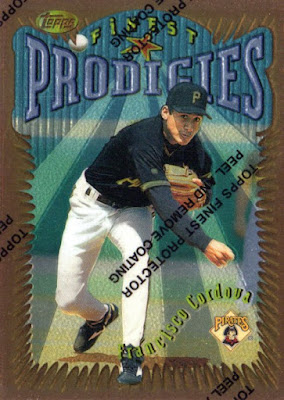 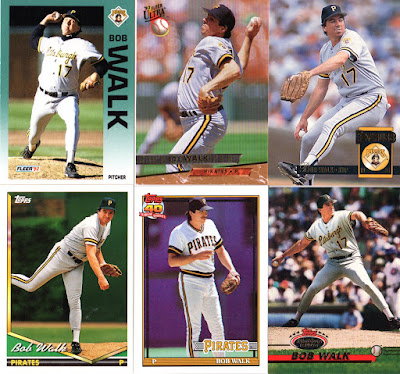 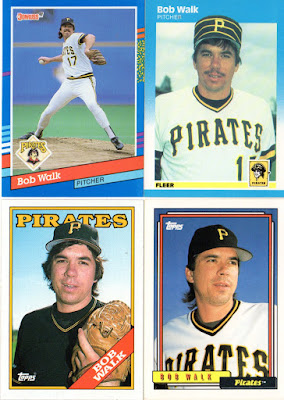 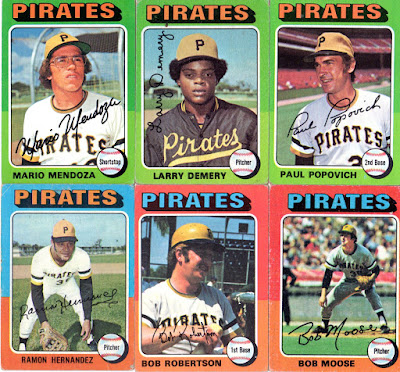 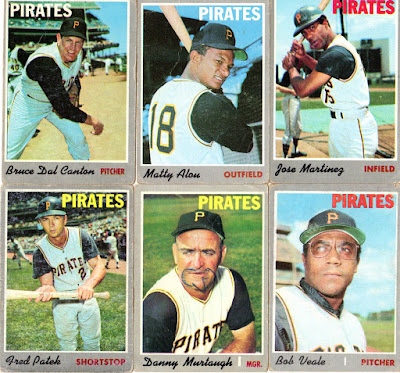 John even threw in some vintage.  You have to like the fake beard on the Murtaugh.

I'm a sucker for Pacific cards. I think a lot of this has to do with the fact my local Kmart would always put them on clearance. I didn't have much money to spend in junior high so I would ultimately choose the cheap Pacific packs. Funny thing is many of the inserts and parallels are super desirable now. 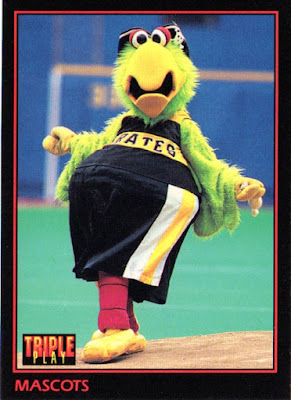 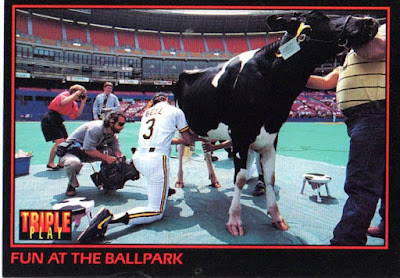 Just Jay Bell milking a cow in the outfield of old Three Rivers. 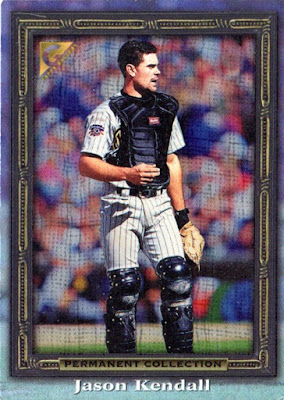 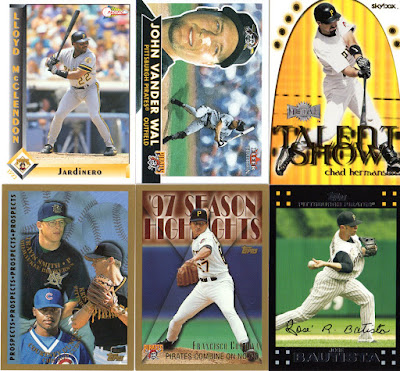 It is cool to get Bautista cards featuring him as a Pirate then I get sad thinking about how good he is. I want to claim the bat flip. 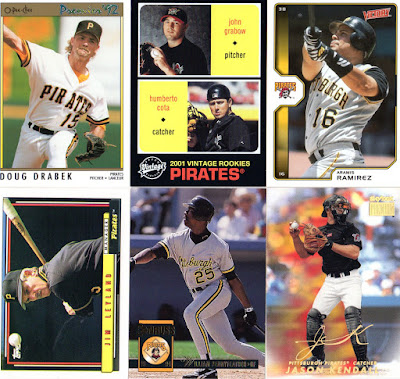 I like the action shot of Leyland hitting infield. I've been trying to find some of the parallels from the old Skybox Premium sets. That is proving to be extremely difficult. 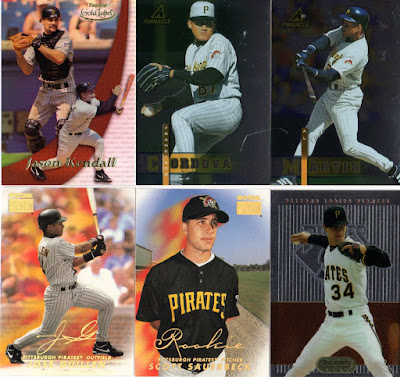 I'm not sure what type of effect Skybox was going with the Jose Guillen and Scott Sauerbeck cards. They look on fire.  You can just chalk it up that it is a 90's card. Everything was fair game. 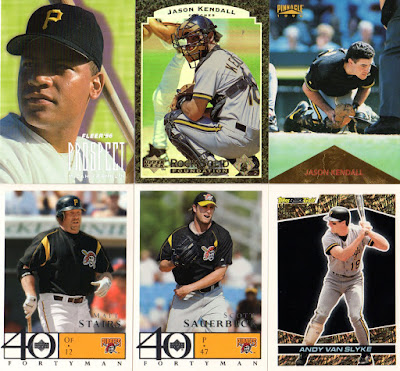 Upper Deck 40 man was a cool/cheap set to open. Extra bonus for a Matt Stairs Pirate card. He was a fan favorite. One of my favorite interviews was him describing his approach at the plate.  He said basically he tries to hit the ball out of the stadium every time at the plate.  He knew his role! 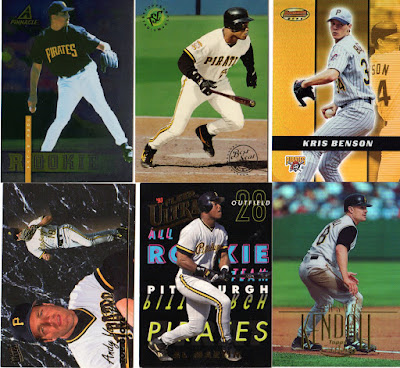 Stadium Club is awesome, but I love the trippy Al Martin rookie. 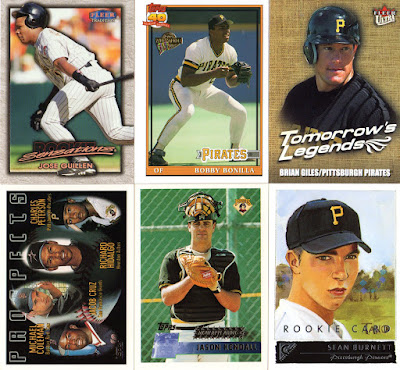 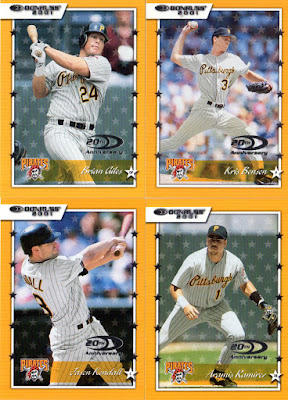 I remember everyone thinking that the 4 guys above were going to lead the Pirates back to respectability. Not quite.....All four were good players, but it helps to have a good supporting cast too.

While that was a ton of cards it was just the tip of the iceberg. I can't thank you enough John for sending all these great cards my way.  I'll do my best to find something for you very soon.

Thanks for reading.
Posted by BobWalkthePlank at 6:10 PM