Back in the late summer I decided to join Twitter.  I figured it would be a nice spot to centralize my baseball news and follow a bunch of fellow baseball card collectors. Like all social media it has its annoyances but the experience has been positive so far.

A few months back I reunited with an old collecting acquaintance from Morgantown. Kin of Bean's Ballcard Blog is pretty well known on Twitter and saw me posting some WVU pictures. After a few messages we realized we knew each other and ran in the same collecting circles in the early 2000's. The power of social media! Recently Kin started up a blog to promote his personal collection. Check it out here.

A few weeks back Kin sent word that he was going to be shipping off some cards my way.  Sounds good to me! Little did I know it would resemble a Jaybarker Fan priority mail bombing. 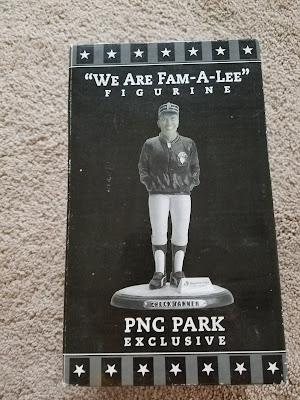 I'm such a sucker for stadium giveaways. Back when I was in banking my whole office was decorated in them. Now they play a prominent part in downstairs decor. 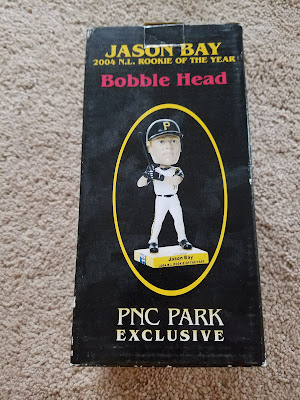 Jason Bay kept me collecting Pirates when they were a laughing stock. 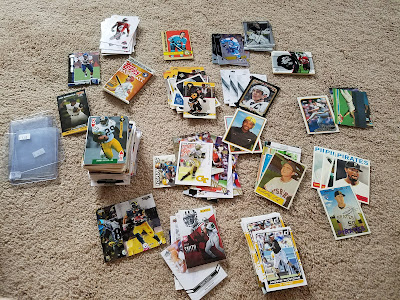 Here is a nice aerial view of all the cards Kin sent. I'll showoff some of my favorites below. This is the main event of the package.  Bautista only has a few certified Pirate autos so it is always nice to get one via trade. Joey Bats is the definition of late bloomer. He was useful as a Pirate, but obviously didn't come into his own until arriving in Toronto. 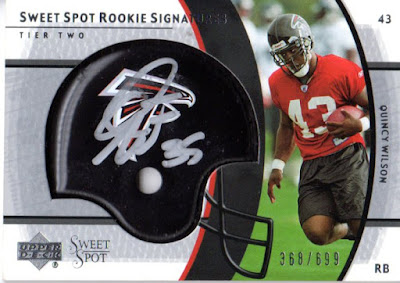 Kin is a WVU guy too so he is definitely dealing from his own stash here which I appreciate. The football version of Sweet Spot held up much better than its baseball counterpart. The only weird thing about this set is the limited autograph space for the signer. Makes for some crunched up autos. 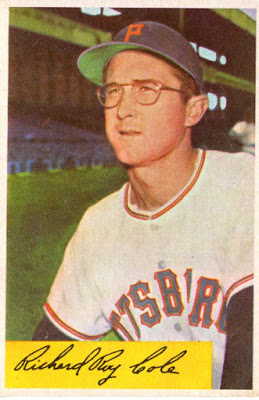 Even vintage found its way in the mix. 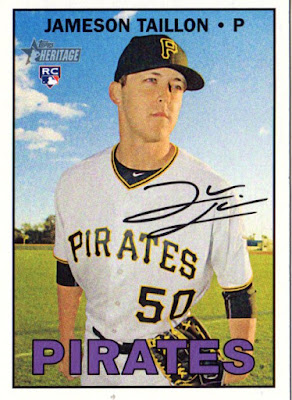 Taillon had a nice season after missing most of the previous two. If the Pirates are going to content for a wildcard they will need the young pitchers to continue to get better. The only thing missing from his arsenal is a dominating third pitch.  If that happens Taillon could have ace potential as his command is already the best on the team. 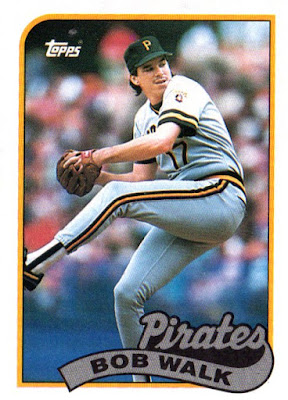 This man needs no introduction. 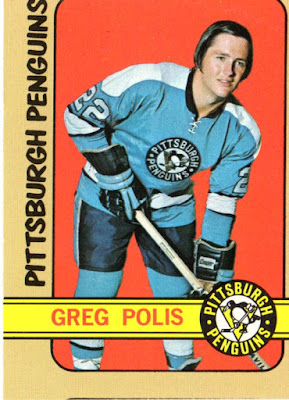 Polis is sporting the same haircut as the villain from No Country for Old Men. 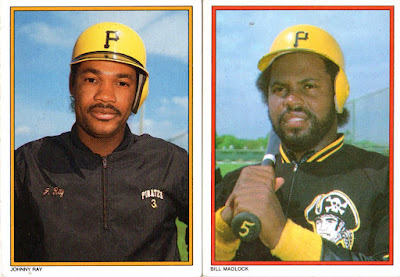 I actually owned a similar jacket that Mad Dog is wearing as a child. 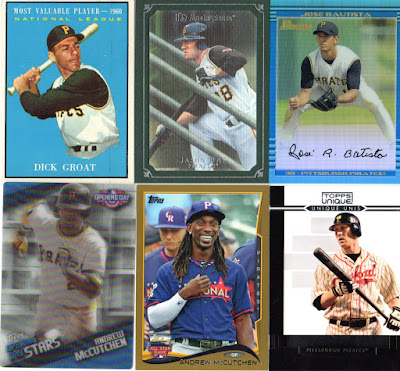 The two Bay cards are the highlights for me. UD Masterpieces is one of the better sets in the last 20 years. Huge fan of the canvas cards.

Nice throwback photo on the Topps Unique card. In case you don't know Unique was one of those super premium sets that centered around mega hits. Quick story..

A couple years back a seller had a Nate Mclouth patch/auto that I wanted really bad. After a ton of negotiating he finally just sent me a message and said he had bought a case of Unique and was trying to recoup some money.  He basically said the amount the money I was offering was fair, but he just couldn't take that big of loss. Could you imagine your case hit being Nate Mclouth on a super premium case bust.....yikes. The card finally went off eBay after close to 6 months. 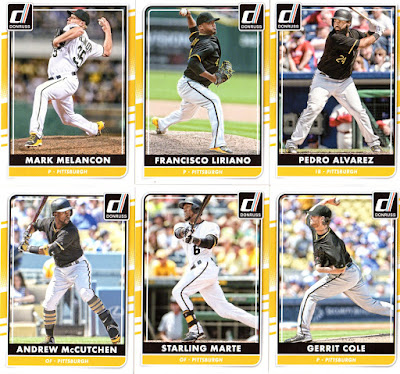 Who would have thought a few years back that Mark Melancon would have one of the richest reliever contracts in baseball history.  Good for him. I'm a big college sports fan so I naturally gravitate to college cards in my WVU collection.  With this bunch Kin has helped me do the same with my Steelers collection. The Polamalu was my favorite.  When I was actively chasing Steeler cards he was one of the hardest to accumulate. He had a big following. 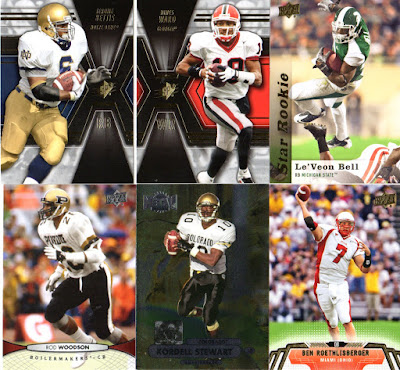 The Slash Metal card and the Le'Veon Bell are my favorites here. 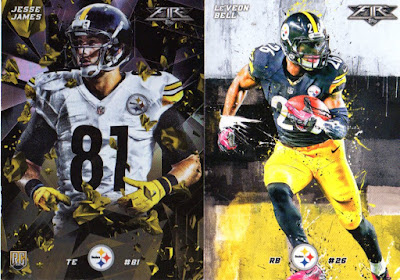 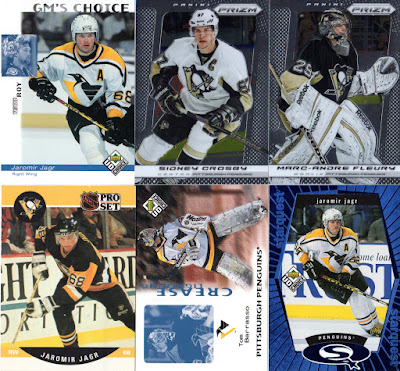 I'm a huge Pens fans but never really accumulated much in the way of cardboard before blogging. Now I have a nice collection thanks to some generous folks. The Sid Prizm and Barrasso UD choice are my favorites. 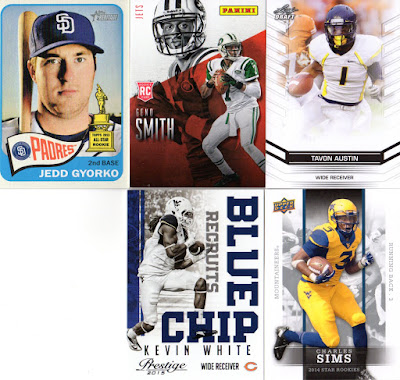 To finish things off is a nice bunch of WVU guys.  I know Kin doesn't actively collect his alma mater like he used to, but it is still extremely generous for him to send these my way.

It was really cool to see Gyorko have a nice balance back year with the Cardinals last year. That power and position flexibility will keep him in the league a long time.

Really appreciate the generosity Kin. I will try and find good homes for the other stuff you sent my way that wasn't Pirates/Pens/Steelers/WVU.  I'll have to think of something unique to hit you back with.

Posted by BobWalkthePlank at 3:42 PM