I'm not one for decorating so I gave my wife free reign to do whatever she wanted with the house.  In return she gave the opportunity to give the basement a Pirates/WVU makeover. The second day after we moved in I was hanging up autograph pictures because I didn't want her to second guess her decision. In my mind if I had 50 items on the wall she would be pot committed on that decision. Fortunately for me she continues to be a good sport.

When we moved into the house one thing I really wanted to do is have a way to showcase some cards. To change things up I created this shadowbox to hang on the wall. 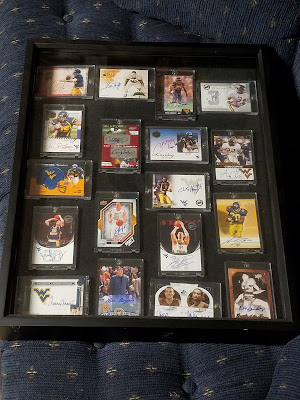 I should have grabbed a better picture, but I guess this will work. Basically the theme of this was to find some WVU legends and feature them in their college uniforms.  The highlights being Jerry West on the bottom left, NFL Hall of Famer Sam Huff on the top row and Hot Rod Hundley on the bottom right.

In the future I would like to do a few more of these but they take up a lot of space.  Plus you don't want a ton of light hitting them all the time so I had to put Ultra Pro UV cases on all of them. My next project might be autos of guys that broke the 20 + year losing streak and beat the Reds in the Wildcard game.

Posted by BobWalkthePlank at 9:28 PM