Another busy weekend at Bob Walk headquarters.  The Mountaineers have a night game so that will make Saturday an all day party.  I'm hosting friends once again and often they like to pretend they are in school still by partying it up.  Good times, but extremely tiring.

Card wise I've been very productive lately.  I sent out 15 packages on Monday and have another 7 or so almost complete.  I'm on a personal no buy November, but I did make a few purchases to round out some trade packages.  Those should be in the mail sometime next week.

The last couple of months have been pretty barren in terms of new Pirate purchases.  Many great trade packages came in, but I really haven't chased anything other than a few 90's parallels.  It seems all my purchases centered around my Alma Mater.

This is probably the fanciest of my most recent purchases.  I think I won this card back in September. 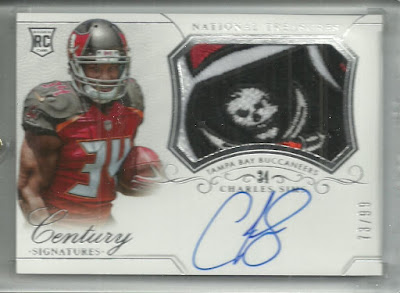 Charles Sims only played one year at WVU but was an impact player right away.  He has shown some nice promise in the NFL, but can't seem to stay healthy.

Obviously this card is unique because of the patch.  The Bucs have some great patch cards out there. I'm hoping to one day get a similar card that has the pirate ship patch.

My WVU collection is perfect for me to chase these type of cards. A card like this for a decent Pirate rookie would be $100+.  Washed up or low end rookies in the NFL are very affordable and many of them get high end releases like National Treasures.

Posted by BobWalkthePlank at 4:11 PM