I haven't had much time to scan this week so I've been showcasing some fun cards from the early 2000's. 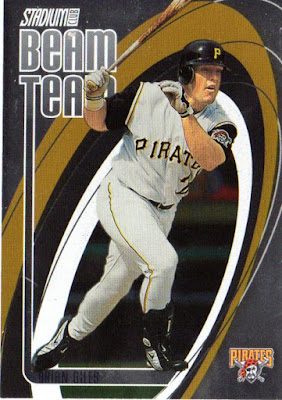 Beam Teams were a staple insert in the 90's up to the early 2000's. I remember a kid in school having a Shaq Beam Team and I thought that was the coolest card ever. They are just one of those inserts that everyone can agree are pretty cool.

In terms of all the Beam Team sets this 2003 version is probably one of the more subdued versions. I guess the acid trip that every card designer was on in the mid 90's up until 2003 was finally wearing off. Either way they still have some flair.

The 2003 version was the last set of Stadium Club until the failed attempt to revive in 2008. Thankfully the set has found some traction again. The 2014 set has brought new life to the brand and continues to be one of the more desired in our community.  The Beam Teams are really wild again too so that is fun.


Posted by BobWalkthePlank at 11:18 PM