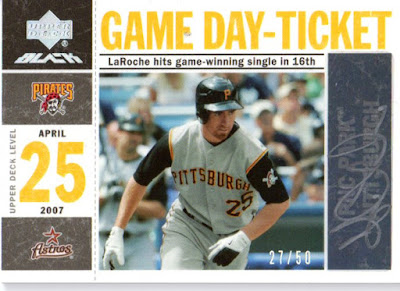 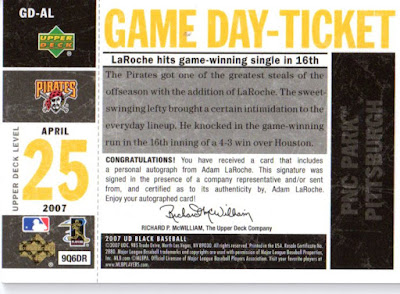 I've had this card for several years.  It would have been a great candidate for my white whale list as it was a huge pain in the butt to find. For whatever reason these Game Day autos don't show up much on eBay.  Right now only 10 are listed with most having high BIN prices. Some combination of scarcity, obscure set  and player checklist plays into it I guess.

Visually these cards look really nice.  The scan doesn't do the auto justice as the silver really pops on the actual card. The only deceiving part is that I believe this is a sticker auto.  It is tough to tell but when I ran my finger across the card I'm pretty sure I can feel the edge of the sticker.  I guess if you are going to make a sticker auto, hiding the actual sticker is not a terrible idea.

LaRoche had a really interesting tenure as a Pirate.  When the Pirates traded for him he was suppose to be a cornerstone piece into turning the franchise around. While he put up decent numbers he just never took him game to the next level. He also was a notoriously slow starter so most of the numbers were put up late in the year when the Pirates were out of the race. Wish we could have gotten a few of those huge years he put up with the Nationals.