Blog Bat Around: My Hardest Set

As most of you know I'm not much of a set builder.  I like finding team sets of the Pirates, but other than that I just don't full around with it much.  The only time I went full throttle in set building was 2014.  This is the year in which I had a tumor removed from my leg and kept pretty much bound to my recliner the whole summer.  Nothing makes you feel better than buying boxes!

I think that year I attempted Heritage, GQ, Donruss and Prizm.  Heritage and GQ are a huge money crunch and I vowed never to do them again.  I finished them more out of spite than enjoyment.  Those two are pretty much the whole reason I stopped looking to complete sets.  The sp's were maddening.

Donruss and Prizm were ugly sets, but really fun boxes to open for the price.  Right around the time of the National Card Show, Dave and Adams put Donruss on sale for an astronomically low price.  I think I bought half a case.  At that time I got the bright idea that I would complete the 2014 Donruss Signatures set. I pulled half the set myself and noticed that the remaining players were manageable. The set didn't have the likes of Trout and Harper and the older players were fun gets like Dave Parker and Don Baylor.  A few redemptions existed, but they were filled in record time.  Overall the set has 50 autos. 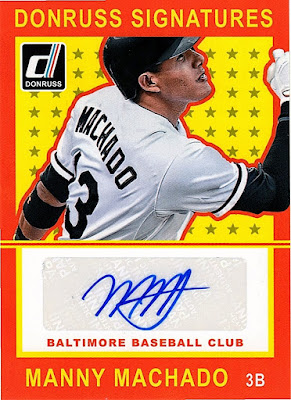 I had thought this Machado would be the hardest to find.  He was the biggest name on the list and carried the most value. Fortunately, it was easy and relatively affordable as Machado suffered an injury and his card prices came down.  The big issue turned out to be that some of these autos were unannounced short prints. SHIT!

Here is the checklist.

Posted by BobWalkthePlank at 3:00 PM