I make it habit to scan checklists when a new set drops on Cardboard Connection.  Mainly I'm looking for Pirates that are just starting to get some cardboard love both in base sets and hits.  Don't get me wrong I love the likes of Cutch, Marte and Cole, but odds are they are going to be in every set.

The problem is with so many sets dropping over the course of the year I tend to miss items that I had no idea existed.  Take this card for instance. 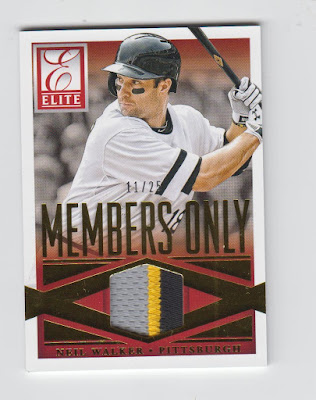 Neil Walker was one of the more notable Pirates during the franchises turnaround.  When he first established himself as an everyday player he got plenty of cards in a variety of sets. For whatever reason his last couple of years as a Pirate most "hit' oriented cards dried up.  So much so that I stopped looking.  Well, when scouring eBay this card popped up.

Nothing that notable about this card, but it was new to me.  For around $7 I was happy to add this card to my collection. Not a bad price since the patches were so hard to pull from these sets. Extra bonus for the three colors.

Have a good weekend!

Posted by BobWalkthePlank at 4:04 PM