When a Good Day Becomes a Stressful Day.

Yesterday my buddy and I decided to take the day off and head to Pittsburgh for some day baseball. Nothing beats having a Ferris Bueller day.  We've done this several times over the years without a hitch.  It is one of my favorite things to do in all the world.

The day turned out to be one that challenged our normal sunny outlook.  First, the drive in was plagued by torrential downpours. Being that I'm from West Virginia I'm use to driving in all types of inclement weather, but this rain was so hard that it basically killed your visibility and traction. About 45 mins into the trip we were witness to a pretty serious 5 car wreck.  It happened about 30 seconds ahead of us. The person in front of me hit their brakes hard so I had to do the same and cut really hard left so I wouldn't rear end them.  Thankfully we came out unscathed.  It was one of those moments where you don't say anything for a few minutes and then let out a deep breath.  We continued to drive in torrential rain until we arrived in Pittsburgh.

With the close call behind us we were ready for an early lunch. 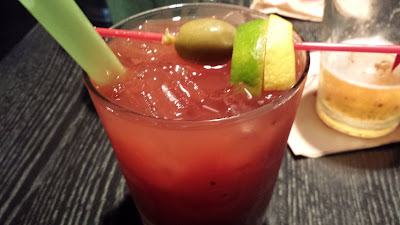 A Bloody Mary calms the nerves.

The extra bonus for this game was that it was a bobblehead giveaway.

The game itself was kind of a dud. The Pirates are in quite a tailspin. Both starting and relief pitching has been sub par and McCutchen has been a shell of himself so far this season. The Pirates really need to go on a nice run before the All Star break or else they will become sellers at the deadline. I guess the silver lining is that the core is all signed and the Pirates will probably call up a good bit of their young pitching.

Some pics from our seats.  I was kind of surprised how good the crowd was.  30k for getaway day is top notch for the Buccos. 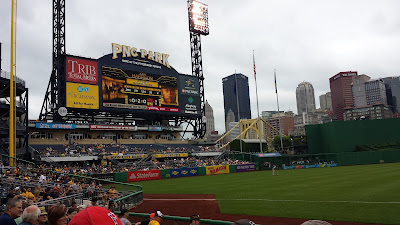 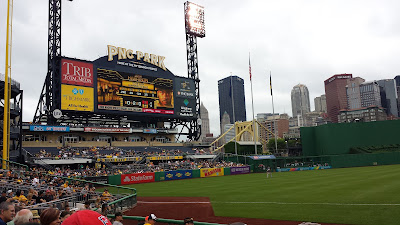 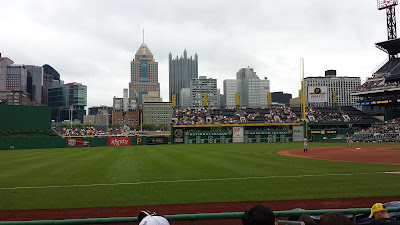 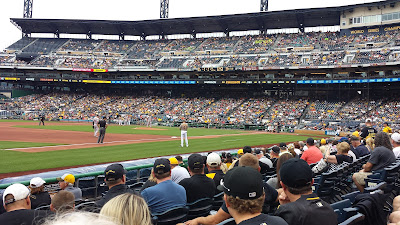 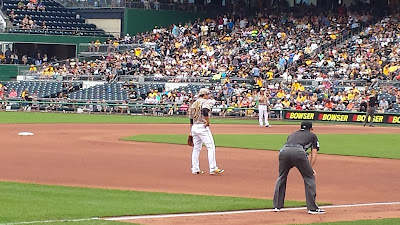 Since the game was over a little before 4pm we figured we head home before rush hour. It was a poor choice. Between what was likely another wreck and road closures it took me over an hour and fifteen minutes to reach the highway.  The distance was probably the equivalent of two miles.  Between the shitty weather and more road closures it took me over 3 hours to make it home.  Normally the ride home is just a shade over an hour.

The experience didn't change my view about games, it is still my favorite thing to do. I guess if you do something enough you will always have that one time where things don't work out.  Such is life I guess. Next time I'm going to casino right after the game and letting traffic die down.  I might be broke by the time we leave but I won't be sitting in my car!

Posted by BobWalkthePlank at 3:59 PM