My Mom is from Louisville Kentucky. One of my fondest memories growing up is going to see my aunt during the holidays and once school ended for the year. My aunt never had kids of her own so she would spoil us to death and let us watch whatever we wanted. This is where I was introduced to one of the weirder movies of all time, Howard the Duck.

The movie was based off a comic book, but rather than making it an animated feature they chose live action. Long story short it was blasted by critics and lost a shit ton of money. Elementary school aged Matt didn't care about any of that.  All I needed to know was that their was a talking duck and people getting possessed by devil like creatures.  In some ways I was probably a more honest critic when I was young.  Now it is impossible to avoid knowing how good or bad a movie is before you even step foot in the theater. I swear I thought I already seen The Revenant before I actually watched it.  Thanks Internet. 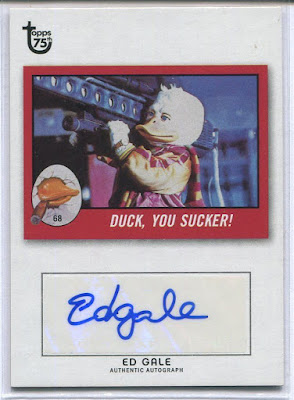 Ed Gale is the actor who played Howard.  He has actually been in some popular movies like Spaceballs and Chucky.  I took a glance at his Wikipedia page and he said he by far gets the most fan mail about his portrayal of Howard the Duck. It is funny how some movies lose so much money in theaters, but gain cult classic status later. Another one of my all time favorites is Big Trouble in Little China and it had a similar path into cult classic movie.

If you haven't seen Howard the Duck you should check it out.  It will change your life. As for the card it only cost a couple of bucks. I thought it would be funny to send to my brother for a nice trip down memory lane.

Do you have a guilty pleasure movie?

Thanks for reading.
Posted by BobWalkthePlank at 7:27 PM

Email ThisBlogThis!Share to TwitterShare to FacebookShare to Pinterest
Labels: howard the duck