I love watching the World Series. I'm one of those weirdos that can sit and watch a whole game even if it doesn't involve the Pirates. This year I could care less who wins. As for a prediction I feel like the Royals are going to get over the hump. It is a fun contrast in styles with the Mets young phenom pitchers versus one of the best contact teams in recent history. I just feel that the Royals defense and baserunning will put them over the top. I'll say Royals in 5 which probably means the Mets will sweep. Also I probably should be careful in picking against Daniel Murphy.... 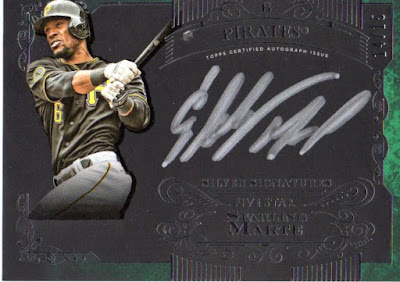 I think the market is finally starting to cool a little bit on Marte. He has been in just about every Topps set the last couple of years and it seems that prices are starting to reflect that. I've been picky lately as I've been expecting this drop so I may pick up the pace some in the coming months picking up cards that look nice.

This card was won from a seller in Japan. I've had pretty good luck recently with cards coming from Asia. Usually you will pay a premium in shipping (anywhere from $4-$7), but the selling price is much cheaper. Without looking at completed auctions I'm guessing this card would push the $30 range, but I got for less than $20.

Enjoy the World Series. Thanks for reading.