I haven't really decided if it is a good habit or a bad one, but I often utilize seller's combine shipping. Sometimes I feel I trick myself into thinking I'm getting a good deal, but in reality I'm probably just spending extra money on a card I really don't need. Other times I'm happy I did the search as it can be a treasure trove of cards I needed. Such was the case recently......

Recently a seller had a Tom Gorzelanny auto that I wanted. It just happened he had quite a few Gorzo autos after exploring his eBay store. 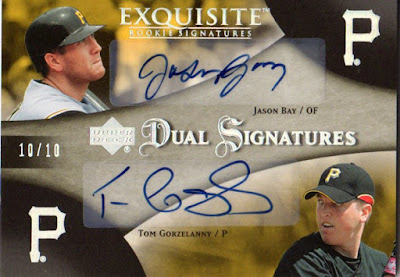 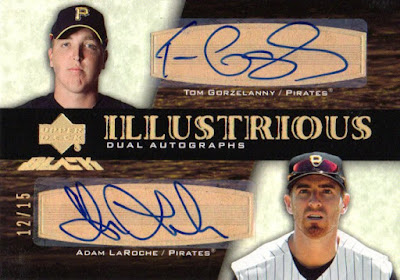 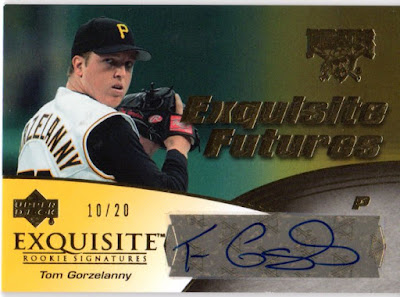 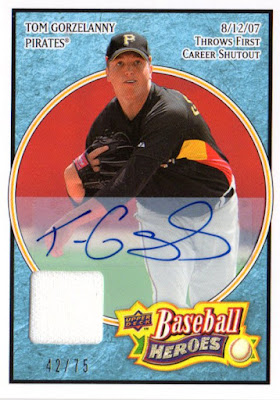 What made this deal so great was that it also included a low numbered refractor of Marc Bulger. The whole lot was just a shade under $12 shipped.

The card that originally got my attention was the Exquisite featuring only Gorzelanny. I hadn't seen that card for a long time and knew this would be a good opportunity to pounce.  The big bonus was being able to get the Bay/Gorzo auto for cheap. That card would have carried a good price tag back when that product was released.

Gorzo is still hanging around as a reliever, but really hasn't had much success sticking around long term. A typical season will see him get a decent amount of innings, but also shipped to AAA a few times. I'm hoping his career trajectory will be that of Zach Duke and that he can get a job solidified in the bullpen.

On a side note Gorzo was part of the trade to the Cubs that netted Josh Harrison. At the time Harrison seemed more of a throw in as Kevin Hart was the main piece.

Hope those on the east coast is surviving the storm.  We are expecting about 18 inches here.  Yuck!
Posted by BobWalkthePlank at 6:28 PM