Did you know that yesterday was National Bobblehead Day? I sure didn't.  Thanks to my good pal Micah for the heads up.

I have a pretty sizable bobblehead collection, but most are packed away in storage. I love the things, but they take up a decent amount of space. Most of the ones I have collected over the years have been stadium giveaways. Back in the early/mid 2000's the Pirates like most teams went bobblehead crazy. You would have 7 to 10 a year released. Lately the Pirates have slowed down to the point where they are only issuing a couple a year. This has proved to be a better practice as you can make sure a quality name is attached to the figure. The mid 2000's Pirates were made up of a lot of poor players. So the likes of Ryan Doumit, Kip Wells and Chris Duffy got bobbleheads......yikes! 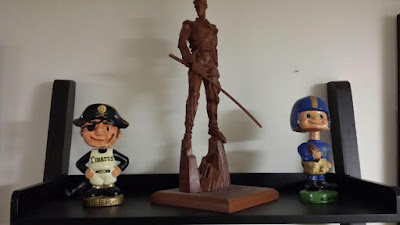 The two bobbleheads that I have displayed at home are an old school Pirates issue from the early 60's and a WVU bobblehead that is most likely dated back to the 60's as well.  While the Pirate issue has more value, the WVU bobble holds more sentimental value.  It belonged to my Grandfather and it was given to me after he passed.


Posted by BobWalkthePlank at 4:30 PM

Email ThisBlogThis!Share to TwitterShare to FacebookShare to Pinterest
Labels: bobbleheads