San Diego is Just About Perfect

It really wasn't much of a surprise that I liked San Diego. The weather, beer and food are all top notch. While the locals said it was unseasonably warm, I thought it was perfect.

We took the first flight out of Pittsburgh so with the time change we landed in San Diego a little after 10am pacific time. Our hotel was in the Gaslamp District so we had plenty of things to do within walking distance.

Couple pics of the outside area of Petco Park.  We had a lot of time to kill before game 1 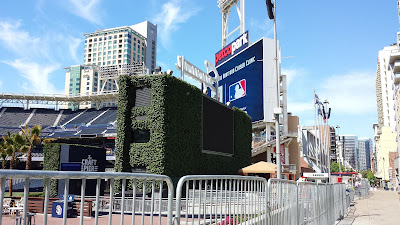 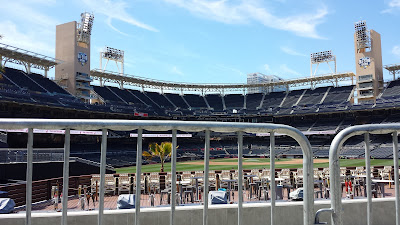 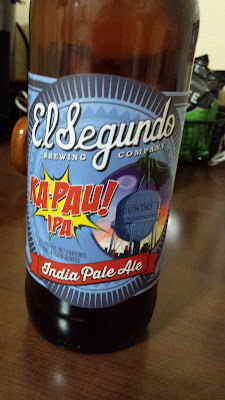 Hotel beer! Right before we checked into our hotel I checked out a local beer store. The beer was bottle 3 days before we opened. Fresh IPAs are the best. 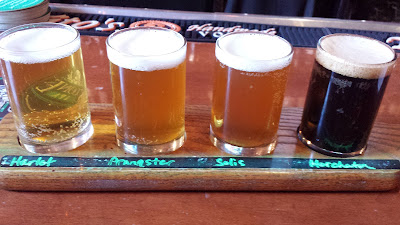 A picture of  my first flight of beer from a gastropub called Hoppin Pig. Great tap list and some tasty food.  It came recommended from a good friend of mine who traveled to San Diego back in the late fall. 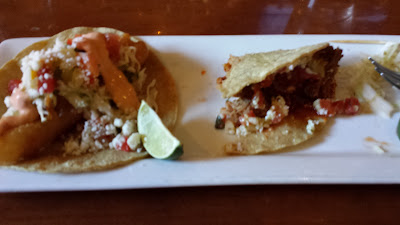 I think I had already ate half this meal before I took a picture.  Needless to say these were awesome tacos.  One was fish and the  other carnitas. 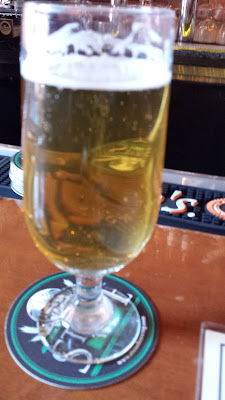 This was a Modern Times brewing company beer. More from them later. I think their beer might have been my favorite from the entire trip.

Here are some pics from my seats from game 1. The Pirates would lose the game 5-4 it what was probably the longest 9 inning game I've even been to. The game had no flow mainly because of replays and a prolonged argument about a balk call which caused Padres manager Andy Green to be thrown out. I thought only the Red Sox and Yankees played 4 hour 9 inning games. 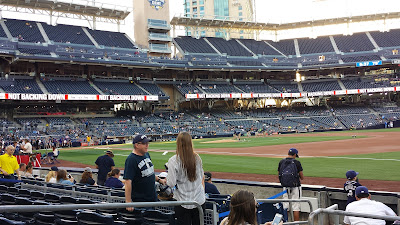 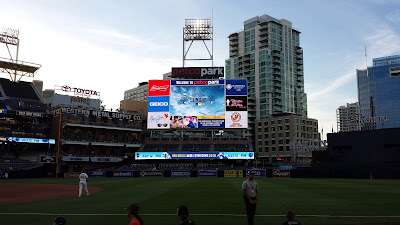 The plan for Day 2 of the trip was to head to the North Park area of San Diego.  It is home to a ton of breweries and restaurants. Since we were on the clock everyday to make sure we were back for the game in time we really had to prioritize where we wanted to go. 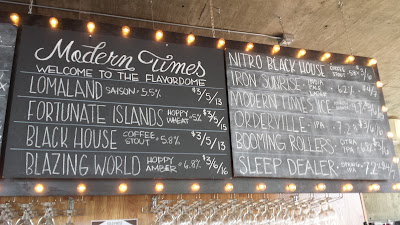 First stop was Modern Times. This wasn't their main brewing area, but it was still one of my favorite stops on the entire trip. The beer was fantastic. I'm a big coffee stout fan so the nitro Black House beer was probably my favorite.

The good thing about the North Park area is that once you are there you can walk to everything.  Next stop was one of the more famous craft beer bars in the US. Bar Toronado. 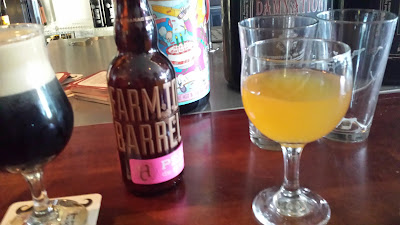 My first beer at the bar is not pictured because I was too busy enjoying it. It was called Pliny the Elder from Russian River. It is a pretty famous beer and one that is very sought after by craft beer nerds. I had had it once before out of a bottle, but it was nice to get it on draft.

The dark beer pictured is called Old Rasputin. It is a pretty easy to get imperial stout, but what made it unique here is that it was on Nitro. Creamy Deliciousness!

The bottled beer is a peach sour from Almanac. It was fantastic. The only drawback to Almanac beers are the price, but usually no matter who makes the sour it is going to be pricey. 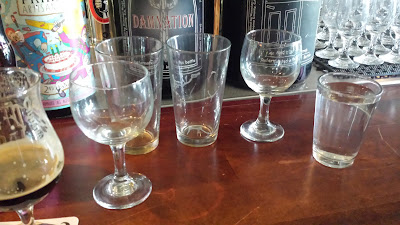 Yeah, Bar Toronado was really good.....The interesting thing about this place is that it gets a lot of beer snobs who are ultra annoying. The main bartender working must have seen me shake my head at one of the beer douches and it made him laugh.  He gave me a free beer!

The last stop in the North Park area was Mike Hess brewing. This came highly recommended from my friend and rightfully so. 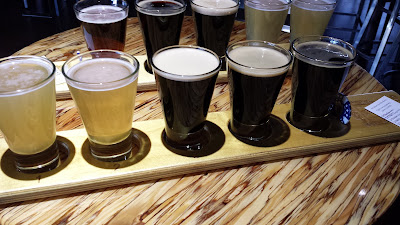 The beer was delicious and you get a free glass with every flight purchase! 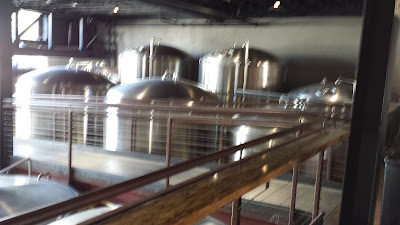 Cool view of the big vats.

I don't have any pictures from game 2 because my phone was dead. The seats we had were right behind the Pirates dugout. The unfortunate part was the Pirates didn't show up. They were shelled 8-2.

Day 3 was split in two parts. First was the Little Italy area of San Diego.  It was about a 2 1/2 mile walk, but it was so nice outside we decided to enjoy the weather.. The main stop in this area was the Ballast Point taphouse. 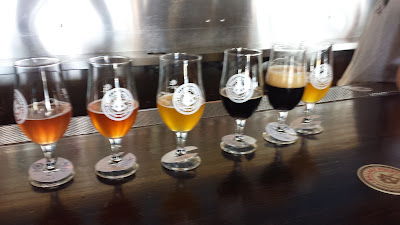 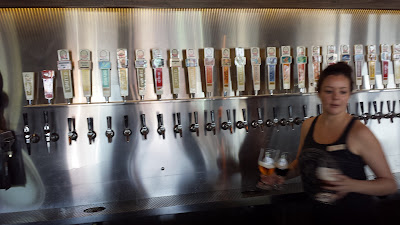 Ballast Point has several locations in San Diego, but this one is unique because they do a lot of their research beers here. I tried beer with ingredients like pepper, fig and passion fruit. It was a really cool spot and the prices were better than any of the other places we stopped.

Since we hit Ballast Point I felt obligated to hit the other big craft brewery in San Diego, Stone Brewing. 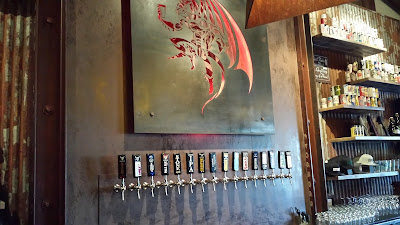 This was another satellite brewing area, but the plus was it was right next to Petco Park.  I've had a lot of Stone beers over the years so I was interested more in the rarer releases in which they had plenty of. The only negative from this stop was the price. They priced their small pours at around $3.75 a piece. For a high abv stout that wouldn't be bad, but for the ipas and pale ales that is a little pricey. It still didn't stop me.....but just a warning if you go.. 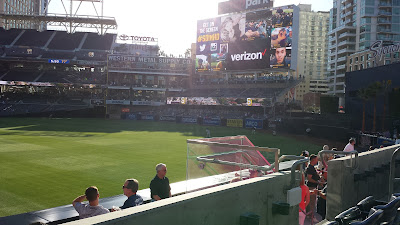 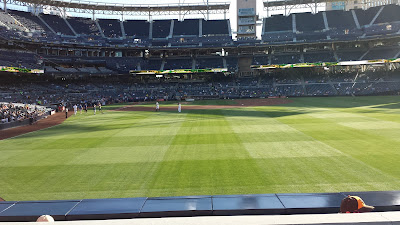 Our seats for the final game were in right field.  For the price you really can't beat them. Close to all the good beer, great view of the scoreboard and you can yell at Matt Kemp for being overpaid! The Pirates must have been pissed about the first two games because they won 11-1.

Overall it was a great trip. As with any trip you always wish you could have a little more time. My wife wants to go there at some point with me so I didn't hit any of the tourist activities like the zoo and naval area. I don't think she would have liked brewery hopping so I tried to get as much in as possible this time.

When it comes to beer I would probably put San Diego at the top of cities I've visited. The only other cities that I've been to that could compare is Portland and Chicago.

I got a lot of catching up to do this week card wise. I still have several cards to send out including Tony Burbs and Greg Zakwin. My wife also put a huge stack of incoming mail that I'll be working on all week. Yay cardboard!

Thanks for reading.  Go to San Diego!
Posted by BobWalkthePlank at 3:54 PM