Don't get me wrong I want them to lose eventually,  The Mets were just way too banged up to give the Cubs a competitive series. I can't stand Madison Bumgarner, but you have to tip your cap. Syndergaard was more dominant, but Bumgarner was more efficient.

I'm not even sure what I want to happen in the Cubs/Giants series.  My personal preference is that I would love to see the Nats or Dodgers make the World Series. I have man crushes on Kershaw, Scherzer and Harper. My fear is that my preseason pick of the Cubs/Red Sox will come true.  It would be a great matchup but the media coverage would be insufferable.

Seriously, can you imagine all the gooey promos and hot takes about a Cubs/Red Sox World Series. Ratings would be through the roof, but you would have the skip all the pregame and watch it on mute. Might be worth to check out the Spanish broadcast.  Although I could probably recall enough of my high school Spanish to know that they are talking about the curse of the goat, Grandpa David Ross and Big Papi.

I bet the commissioner would cry if the Indians/Nats made the World Series.  I think a rugby match on Fox Sports 1 would get better ratings. 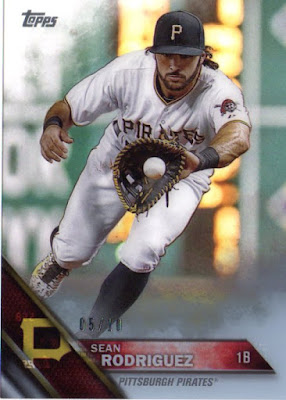 It has been a few months since I've added a clear parallel.  I'm always on the hunt, but the Ebay well has gone dry.  Thankfully this one came to auction a few weeks back and didn't get much attention. The winning bid was a shade under $10.  That is very cheap for the clear parallels.  I'm sure this selling price makes Sean Rodriguez unhappy.

Thanks for reading! Enjoy all the games.


Posted by BobWalkthePlank at 8:49 PM