Sometimes Prospect Magazines Get it Wrong

A few weeks back reader John Hazen approached me about some extra Bowman cards he had. Being a fan of the prospect cards I took him up on his offer. 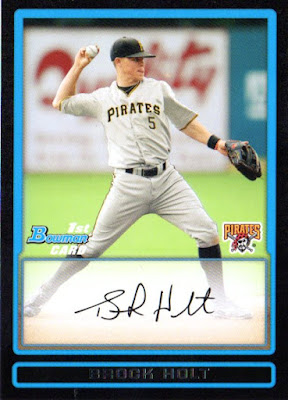 Brock Holt is a guy that was never really registered on the Pirates prospect radar. He wasn't well regarded as a defender and had little to no power. Through a rash of injuries Holt got a small taste of big league action when Neil Walker got hurt in 2012, but it wasn't that memorable.

When the Pirates decided to trade Joel Hanrahan to the Red Sox the Pirates threw in Holt in the deal. The centerpiece of the deal for the Pirates were prospects Jerry Sands and Stolmy Pimental. The extra guy the Pirates received was Mark Melancon!

It is funny how trades work out sometimes. Hanrahan was suppose to sure up the back end of the Sox pen when Andrew Bailey begun his meltdown and Melancon struggled. Joel would go on to barely throw a pitch because of injury.  Brock Holt on the other hand turned himself into a super utility player and even made an All Star team.

For the Buccos none of the prospects panned out, but Melancon would regain his form he had in Houston and had three outstanding seasons with the Pirates. 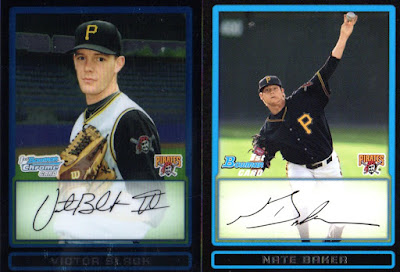 Vic Black sounds like a gunslinger from the old west. 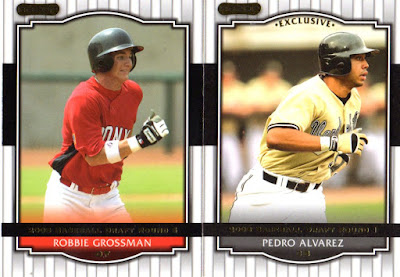 Robbie Grossman was a decently hyped prospect for the Pirates. The Pirates traded him away as part of the deal for Wandy Rodriguez.  He never really gained his footing in Houston and balanced around between AAA and the big league club.  Once Houston developed better prospects he was left without a job. He showed up in Minnesota this year and may have earned himself another look.

Pedro Alvarez makes me sad. So much hype, but just could never put it all together. His power tool is legit so he'll continue to find work, but for a guy that was supposed to be a franchise altering talent he is considered somewhat of a bust. I still chase his cards, so it was nice to see this Vanderbilt card come my way.

Thanks for all the cards John! I'll hit you back soon.
Posted by BobWalkthePlank at 10:14 PM