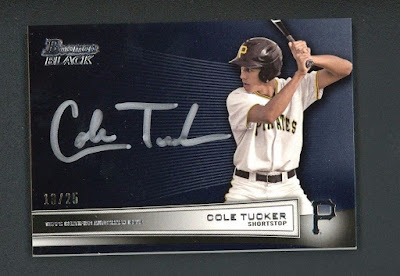 I don't fancy myself a prospector, but enjoy chasing after rookie Pirate autos.  Sometimes prospect hype leads me away from the Bowman sets and towards Panini and Leaf, but that is fine with me. Unless the player is super hyped like Bryce Harper you can almost always find a lull to pounce on the higher end cards at a later time.

Cole Tucker was never an expensive autograph to begin with.  He was a Pirates first round pick back in 2014, but only had moderate hype because of his slim build and distance from the major leagues. While injuries has slowed him down, Tucker's stock has been slowly rising.  Many believe he can stick at short which automatically makes you a hundred times more attractive.  My guess is Tucker will start at high A this year with the hope of a promotion to AA Altoona around the mid point of the season.

With all that being said Cole Tucker is still relatively unknown and his card prices reflect that. This Black auto only set me back around $13 which is a nice price considering the product. Now he just needs to turn into Francisco Lindor or something like that....

Posted by BobWalkthePlank at 11:14 PM