Damn You Mike Trout and Your 25% Off Coupon

Topps Now has been a bit of a roller coaster ride in terms of interest for me. I was intrigued by the concept when it first started and purchased the first handful of Pirates released. Soon after I became bored as I was upset that the many of the photos being used were just run of the mill. To me that seems to defeat the purpose of capturing unique game moments.

A little before the All Star break I got rejuvenated when the Pirates started calling up some high end prospects and the corresponding photos were much more unique.  About this time I discovered that I could save a few bucks by purchasing cards from eBay instead of Topps.  Back to feeling good again!

While I think I'm in the minority within our community, for the most part I ended up liking Topps Now. The Buccos were middle of the road in terms of cards released so the financial commitment was minimal. It was also cool that the Pirates received card #1 in the set (Francisco Liriano).  I missed out getting the card at release, but got one via eBay before the price really took off.

Going into this season I really hadn't thought about if I'm going to partake in year 2. In my head it seemed like just a good idea to just start cherry picking rookies and unique photos. Of course Topps knows many people are on the fence like me and sent these out last week. 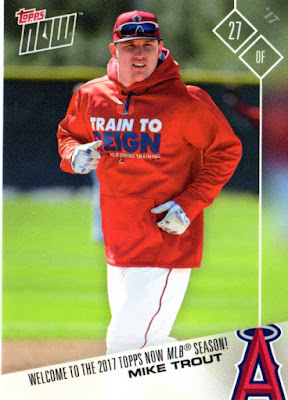 Topps is producing a Spring Training set for every team with a "sticker price" of 49.99.  If you purchased a Topps Now card last year directly from Topps you should have received this fancy Mike Trout coupon that gives you 25% off.  Knowing myself I'll likely cave and purchase the set.

Is the set overpriced? I think most reasonable people would say yes.  You could make the argument that the best deal for some teams is to buy the autograph edition for $99.99  where you get the team set plus an auto. I've seen a few of the signers have been announced and the checklist looks pretty good. In terms of Buccos the signers are Marte, Taillon and Glasnow. It would be tempting had the checklist included Cutch or Austin Meadows.

Is anyone else going to buy one of these sets? Am I the only sucker.  Feel free to make fun of me below.

Posted by BobWalkthePlank at 10:03 PM