Tonight was poker night for me.  It is always kind of funny because I'm the odd man out being that I'm the only non police officer. Feel sorry if someone ever tries to rob that game..... 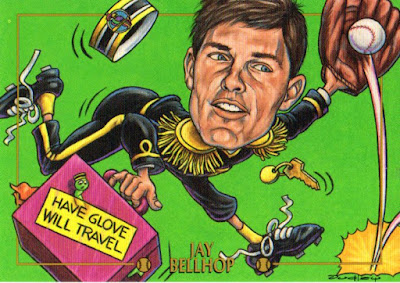 I always have to laugh at cardtoons cards. I'm pretty sure the players association sued cardtoons and it was caught up in court forever.  From what I've read cardtoons won the lawsuit but disappeared shortly after. What a shame. We need the garbage pail kids version of baseball! 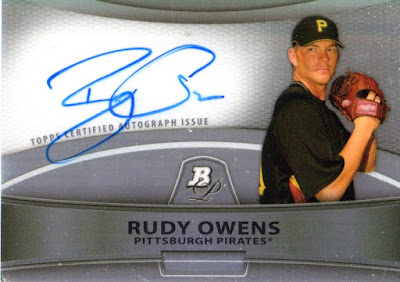 Not everyday you get an auto via plain white envelope. Rudy Owens had a decent amount of prospect pedigree for the Bucs.  He was a late round draft pick by the Bucs but was pretty successful in all his minor league stops. The Bucs traded him to the Astros in the Wandy Rodriguez deal and he had a hard time gaining his footing after that point.  As of late 2015 I'm not sure where Rudy ended up. 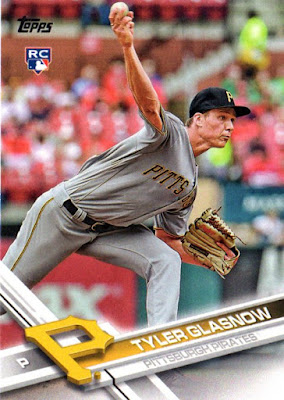 Tyler Glasnow is the ultimate wild card for the Buccos.  Now that Alex Reyes is getting Tommy John surgery you can easily make the argument that Glasnow is the highest rated MLB ready pitching prospect.  My guess is that he will start the season in AAA but could easily crack the rotation if all goes well in July. The Pirates are likely to be pretty conservative with Glasnow as he has had command issues in the past.  Glasnow's 6"8 frame may take a while to develop.  I think every Pirate fan has their fingers crossed that he can develop into a high end starting pitcher.

Thanks for the nice surprise Tom!!!!


Posted by BobWalkthePlank at 11:24 PM