I got six trade packages out today! I've been struggling lately finding time to get some cards in the mail. The good thing is by sending these cards out it forced me to organize my work space which in turn helped me locate some more cards to send! Hopefully I get get back to my early spring trading habits when I was getting double digit packages out at the same time. 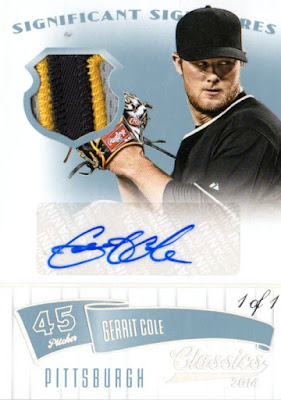 Not one of my favorite cards in my Cole collection, but it was a good enough deal to add a premium card.  Panini Classics was set that I actually liked, but mainly for the pre war player checklist.  The Pirates were well represented with the likes of Honus Wagner and the Waner brothers to go along with current Buccos like Cole.

I was disappointed when Panini cut the cord after one year of Classics.  One of the main issues is that it was priced like a premium set and nobody bit. I ended up opening a few boxes when the prices dropped over 50% last year. It seems like Panini should stick to mid tier sets as they seem to struggle with high $ baseball boxes. Off the top of my head only National Treasures has seemed to work over the years. Not too many people want to spend $100+ on no license and stickers.

I'm hoping that some of these discount boxes show up again as they made a nice bust for my box break with Brian and Kevin.

Thanks for reading!
Posted by BobWalkthePlank at 10:40 PM