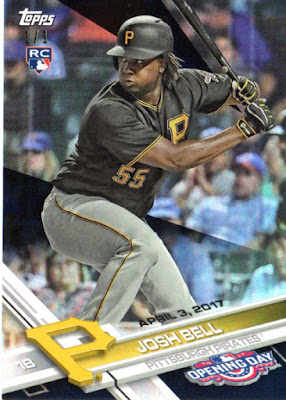 I was hoping to show Dennis's of Too Many Verlanders trade package today, but the weather was way too nice to spend indoors.  I'll have to finish scanning tomorrow.  Sorry about that Dennis.

Along with a couple great trade packages, I recently scored a couple high end Buccos that arrived over the weekend.  This Josh Bell kind fell into my lap via eBay auction.  I put a low bid on it and for whatever reason it ended up holding up.  The final tally was around $40 which seems pretty reasonable since this is an actual rookie card. Was I wanting to spend that much....no, but the price seemed more than fair so I'll just not buy as much the next month to justify to higher end grab.

Bell has been super streaky this year and is showing all stages of rookie development. The biggest issue was his defense and that has been than average. His offense has shown more power than expected, but his plate discipline has faltered from last year.  If that improves over the second half of the season the Pirates will have to be thrilled with the overall development.

Posted by BobWalkthePlank at 7:50 PM