It had been a while since Marc (Remember the Astrodome) and I swapped cards.  In some ways we are probably not the greatest trading match as Marc collects a little bit of Buccos on the side.  Marc looked past those details in our latest swap.  Much like the package from Nick I showed yesterday, this one also felt like it would be a good day at the card show.  So much great variety.

Marc brought the heat right away.  To me this is the blog trading version of the bat flip.  Check this out. 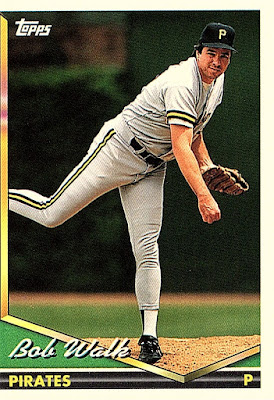 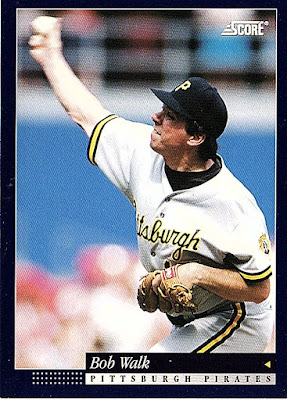 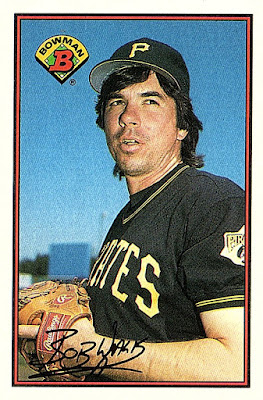 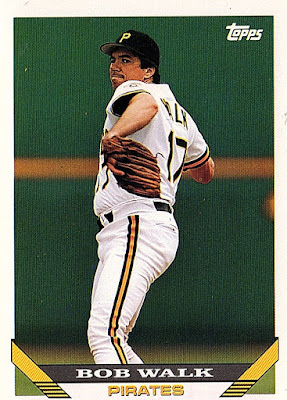 The prototype delivery. I'm sure this is studied today.  Pretty sure I head Max Scherzer say that he owes his top shelf stuff to Walk. 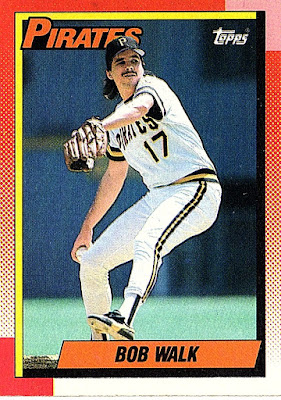 The stache and hair were almost at perfect symmetry here. 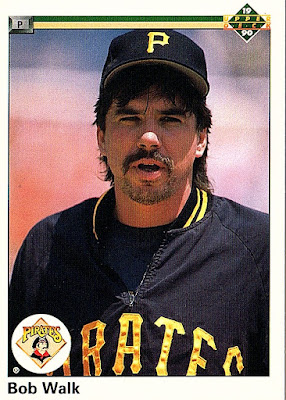 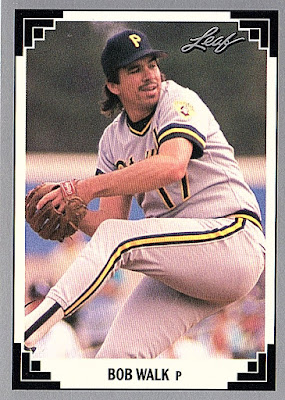 You can see Walk almost laughing on this Leaf card.  He knows no one can hit him. 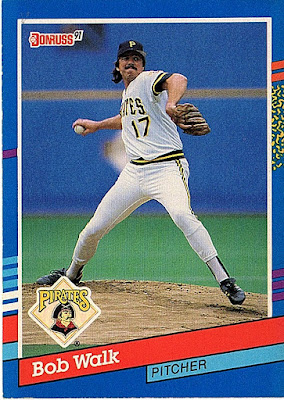 Someone made him mad. 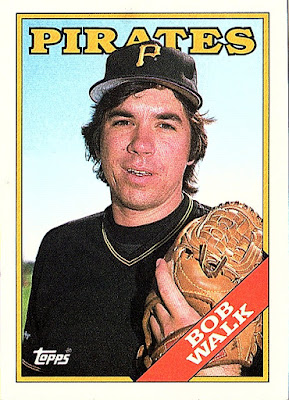 I've been thinking about being Bob Walk for Halloween this year.  Just don't know if I can get my hair that perfect. 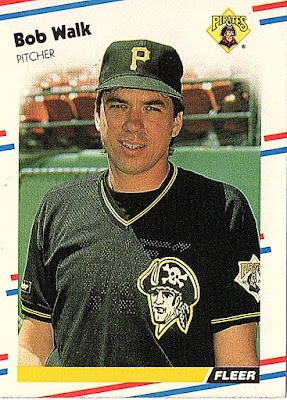 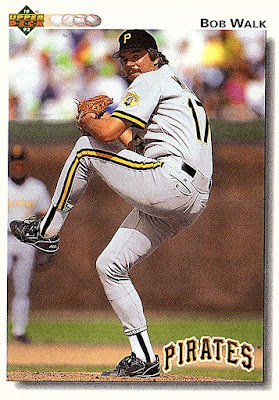 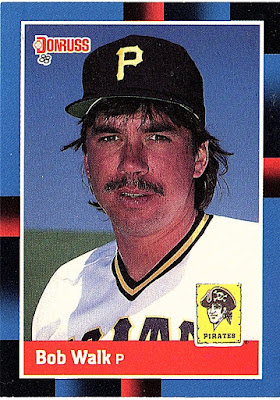 A few years back I tried to dissect what the best Walk card would be.  It turned out to be a fools game because they are all great.  Non official list would have this 88 near the top.

Alright, time for the "other" cards of mere mortal players 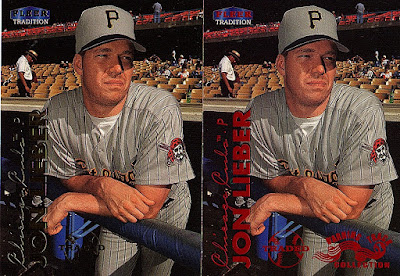 I hadn't seen a Warning Track variant in a while. 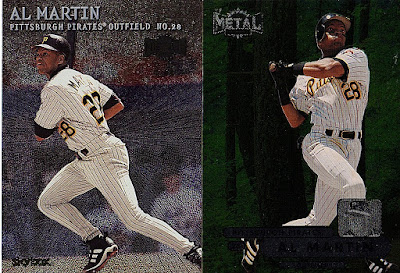 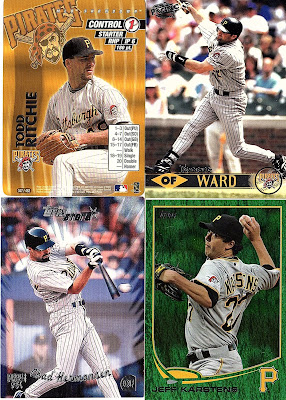 The green cards should be called "Matrix" variants. 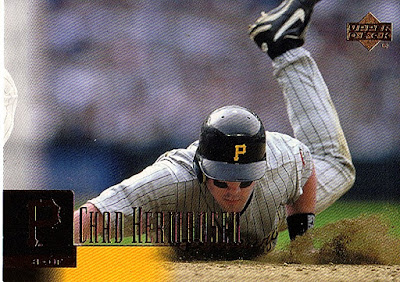 This is one of my favorite Hermansen cards.  Never a fan of the blurred out backgrounds though. 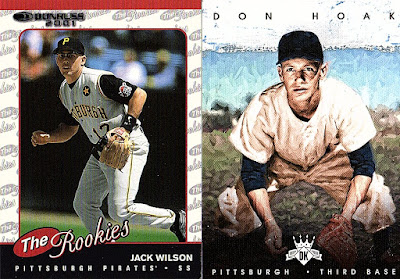 It was exciting to see Don Hoad in DK as a Pirate.  I've been trying to get a few of the relic cards from the set, but they actually sell pretty well.  Think a few Pirate fans shared my excitement.

A trifecta of cool Cooke cards. 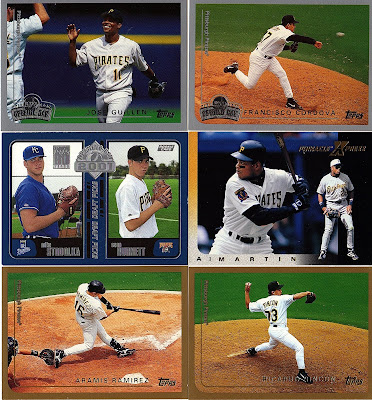 Al Martin is one of my favorites to collect as he was one of the few Pirates besides Kendall to be in most of the mid/late 90's sets.  Kendall can sometimes be a little pricey when trying to collect obscure parallels so I often use Martin to get my fix. 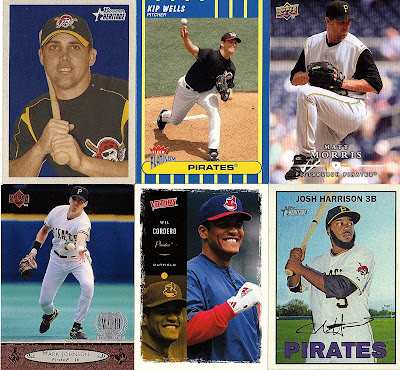 I think UD Victory might get the award for showing a guy in one uniform, but the team list is something else. 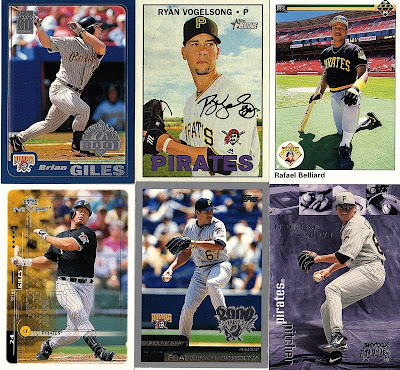 Cordova is a fun guy to collect.  He was really good as a Pirate.  They found him much later in his career after a successful run in the Mexican league. 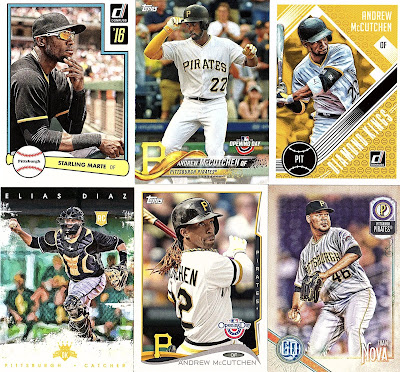 Elias Diaz has been a nice surprise this year.  Makes me wonder if the Pirates will try to deal Cervelli.

Thanks for the great cards Marc.  These were a ton of fun to go through.  Hope you are enjoying Gerrit Cole.

Thanks for reading.
Posted by BobWalkthePlank at 8:23 PM

Email ThisBlogThis!Share to TwitterShare to FacebookShare to Pinterest
Labels: remember the astrodome, trade 2018