I'm out of my rhythm with new releases. After the first handful of sets came out it became apparent that the Pirates were going to be ignored.  This didn't really bother me as I can spend more time chasing older cards and organizing at home. The only real shock was the lack of Bowman love, but I'll live.  As I was writing this I happened to check the new Finest set that is going to be released.  The Pirates have 1 card...... 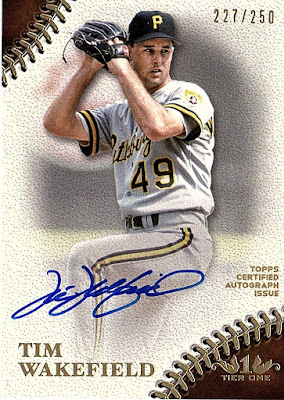 This Wakefield auto was a surprise discovery when looking at some other Wakefield cards on eBay.  Last years Archives Signature Edition had one of the better auto checklists for the Pirates I've seen in a long time. Guys that have seen nothing or very little in way of "hit" cards were featured.  One such player was Tim Wakefield.... actually being featured in the Pirates uniform.  What was surprising was how well his autos sell for.  To this day I continue to search for a card from that set.  That search led me to this Tier One.

This worked out well as the Tier One auto was a good bit cheaper than any of the Archives cards. So while I still want a few of the Archives, the need to always be looking at eBay won't be as heavy now. I just assumed Tier One had only created the 6000th Marte and Polanco autos. Touche Topps. Big virtual high five for getting creative with the checklist.

Posted by BobWalkthePlank at 5:26 PM

Email ThisBlogThis!Share to TwitterShare to FacebookShare to Pinterest
Labels: 2018 tier one, tim wakefield