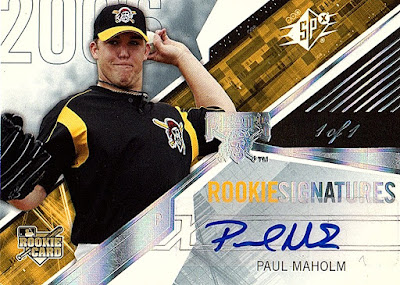 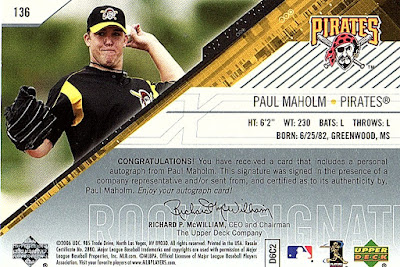 I've been on a nice run of keeping my overall card spending down.  The card above is the most I've spent on a baseball card in over two months ($15).  Kind of funny its Paul Maholm..

Every so often I talk about having eBay tunnel vision when something pops up that I know I want to add.  This was one of those cases.  I have an odd fascination with the pitching staff from the Jason Bay era Pirates.  Guys like Maholm, Zach Duke, Ian Snell and Tom Gorzelanny are all guys that I really enjoy collecting.  I have most of the "common" cards, so my hunt usually consists of lower numbered parallels.

When dealing with these players usually your main worry is that the shipping will probably cost more than the card itself.  With this being a 1/1 I knew I was going to spend a little more money, but you just never know how high things will get.  Thankfully $15 was a manageable amount.  In my mind I was thinking $10ish, but I wasn't going to let $5 stop from getting a nice addition.