For the first time ever I went to a postponed Pirates game. I've been to quite a few rain delays, but the torrential downpours and lightning was too much to overcome. The game was called after 4 innings. Hopefully the makeup game will be at a convenient time. I did manage to snap a few pictures in between getting soaked. 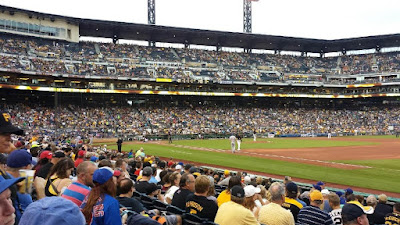 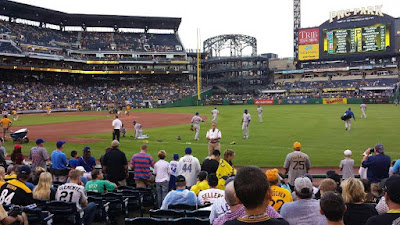 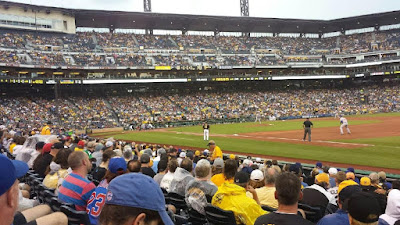 Cubs fans always travel pretty well to Pittsburgh. They might be my favorite visiting fans as 100 years of losing usually keeps you pretty reserved. Pirates fans can relate to them very well since we had our own unique losing streak.

Now for a little cardboard.

My basketball card purchases are few and far between these days. The desire is always there, but WVU just hasn't produced any NBA talent. Devin Ebanks and Joe Alexander have a fair amount of releases, but I've been able to pick up most over the years for just a few bucks. Other than that I usually come across a few Jerry West cards I like and that is it.

That leaves higher end/obscure cards to track down.  Last year I found this odd combination on eBay. 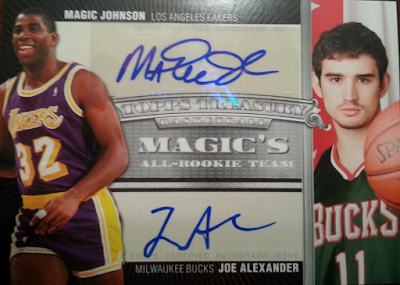 I may be the only person in the world that chased this card because of Joe Alexander, but I love it! The set this card came from is 2008-2009 Topps Treasury.  This set was full of weird gimmicks. It had rip cards, minis and every parallel under the sun. Complete craziness, which explains why the set had a short life.

When examining the checklist further I did notice that their were Larry Bird variations of the card above. Well, a year later I found the Bird/Alexander 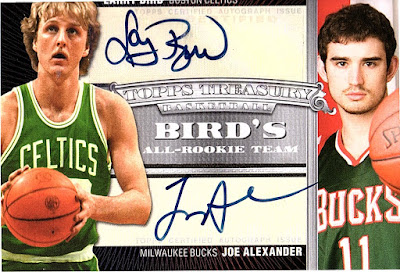 It had been a while since I've added a new Alexander card so I was pretty excited about this purchase. The extra bonus is that it was a neat way to justify a Larry Bird auto. I wish I could say I got this for a great price, but it still ran me about $45. That is about an average cost for one of his autos with similar numbering. I was hoping that the complete flame out of Joe Alexander's career would yield a greater discount.

One of these years I hope that Bob Huggins can develop some more NBA talent. I would love to be more of an NBA fan, but this won't happen unless I have a vested interest in a player. Until that happens I'll still be stuck searching for obscure Joe Alexander autos....

Posted by BobWalkthePlank at 6:51 PM