Back when I was in high school my local Kmart would often mark down Pacific cards.  It was almost impossible to pull anything other than base cards, but I still loved buying these up for pennies on the dollar. I would see pictures of crazy inserts and high end autos and hope that I would be the lucky one opening a dream pack.

Well that day never came, but I still have fond memories of spending my hard earned high school money on cardboard. The funny thing is some of those early parallels and inserts stood the test of time on the secondary market.  A Derek Jeter Cramers Choice insert /25 recently sold for $125 and some of the short printed parallels of the base cards can go for big bucks as well. 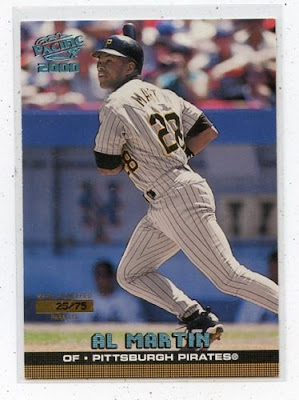 I recently picked this Al Martin up for .99 and utilized the sellers combined shipping offer to add some trade bait as well. This continues my nice trend of finding some unique Pirate cards from this time period. It would be a fun project to add some more Pirates from the Pacific sets as their were 12 different releases back in 2000 alone! Can you name them all.....I had to go on eBay to remind myself what some of them looked like. Pacific Invincible was a very wild set.

Some nice challenges for player collectors in some of these sets. Several of the Pacific sets had low numbered hobby and retail exclusives.

Big series for the Pirates starting tonight. Hopefully the wizardry and black magic of the Cardinals will go away for a few days and allow the Buccos to take two of three.