Gerrit Cole was always a good value buy his first couple years in professional ball. This usually doesn't happen for the number 1 overall pick, but for whatever reason prices stayed down.  I made a point to pick up just about everything that came out minus the low numbered Bowman Chrome cards (prospectors are crazy).

This year Cole has taken a huge step forward. At the beginning of the year most "experts" agreed that if the Pirates were going to contend again, Cole would have to become an ace. Thankfully he has taken the next step and the Pirates are poised once again to make a playoff push.

With this new found success comes higher prices on eBay. You can still find some deals, but for the most part his prices have doubled since the beginning of the season. In the grand scheme of things the prices are not outrageous, but with some continued success I may have to retire collecting Cole just as I did with McCutchen. 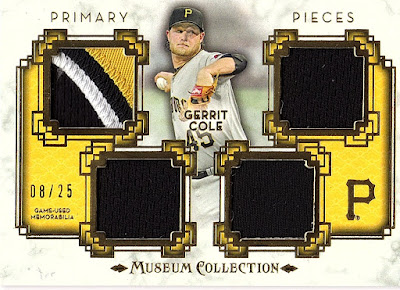 This is a fancy looking card. Thankfully this one stayed below $10 and I was able to cut some shipping by finding some good trade bait cards from the same seller. I don't chase jersey and patches as much as I use to, but some still catch my eye like this one. Cole will really have to step up his game even more now that AJ Burnett may miss the rest of the season.