You Probably Hate These Guys

I've always found umpires fascinating. It is just one of those jobs where you ask "why in the hell would you subject yourself to that." If you do reach the majors the pay is a solid six figures (120k to 300k depending on experience), but the chances you even make it are slim to none. The guys that do make it tend to stay forever even if the skills are deteriorating. The umpires union is strong.

I went on mlb.com to see what requirements they had in order to become an umpire.  It is not a walk in the park. First you have to graduate near the top of your class from an milb/mlb accredited umpiring school. These top umpiring recruits are then sent to an advanced training course where instructors will recommend which trainees should be considered for work in the lowest levels of the minor leagues. After each year the milb umpire developing crew evaluates all the umpires and recommends which ones should advance to a higher minor league level.  This is the case all the way up to AAA.  From this point on you just wait to get the possible call from MLB about promotion. From what I read, the point from graduation to AAA usually takes about 6-8 years. It makes sense that these guys don't want to retire when the reach the pinnacle of their profession.

With such a small group of umpires in the majors (around 68) these guys become pretty noticeable personalities if you watch enough baseball.  Most baseball fans know the likes of Cowboy Joe West and Balking Bob Davidson. I know when I'm watching a game and I see an umpire like Cowboy Joe I just think to myself this guy sucks and he is going to screw one of the teams over. Whether this is fair or not, the umpires persona impacts a game.

Being the curious soul that I am I went and looked at some rankings from players and some unofficial umpire measurements and they were similar for the most part. Players tend to like umpires that don't draw attention to themselves like Jim Joyce and Phil Cuzzi and despise guys like Joe West and Angel Hernandez. Even in the year when Jim Joyce blew the Armando Galarraga perfect game he was still voted the players favorite umpire.

Overall I'm kind on the fence about umpires these days. I can accept mistakes and instant replay has helped alleviate the more egregious errors. The thing that pisses me off the most is when the umpires make emotional decisions. The best case of this is when Bryce Harper was kicked out of the game this year when Matt Williams was arguing balls and strikes.


Short fused umpires are the worst.

I know some people think that the strike zone might be taken away from umpires down the road, but I just don't see it happening as the umpire union would fight to the death. It would be nice to see the strike zone become more consistent. I know I'm tired seeing left handed hitters get screwed consistently with outside pitches. I know umpires are graded/reviewed, but I don't know what ever comes of these reviews. 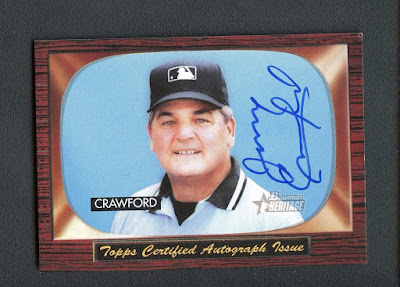 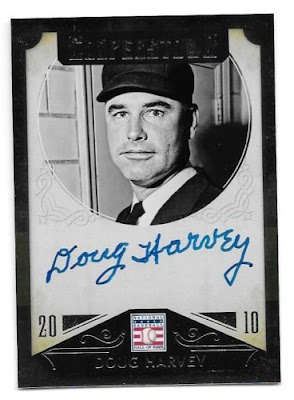 The reason for this umpire post was that I was able to acquire these two beauties a couple days apart earlier this month. Officiating must run in the Crawford blood because his brother Joe is an NBA official and his father was longtime major league umpire Shag Crawford.

The Harvey is from the new Cooperstown set that came out a couple months back.

What are your thoughts on umpires?

Posted by BobWalkthePlank at 7:16 PM