I hope everyone had a nice holiday. Mine was full of family and too much food. I feel like I need to eat salad the whole month of January to make up for the damage of the last few days. Too many good bakers in my family and not enough will power for me.

I'm still attempting to get all the envelopes showcased I received before Christmas.  This time it was my good pal Jeff who sent a pwe.  A while back he featured a Mario Alford auto that peeked my interest and he was nice enough to immediately send it my way.  Also, being the cool guy that he is he also threw in some extras! 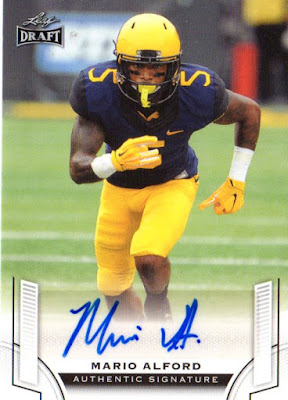 Alford only played two years at WVU, but made the most of it as a slot receiver for the Mountaineers. He was a late a draft pick by the Bengals, but has only seen minimal action. 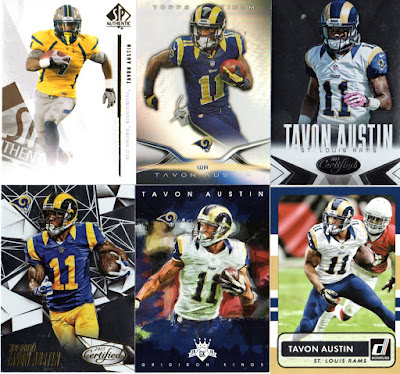 Jeff sent me a slew of Tavon Austin cards. It has been fun watching the Rams get Tavon more involved this year in the offense. This year alone he has 5 receiving, 4 rusining and 1 punt return touchdown.

I'm a huge sucker for the SP Authentic cards as they feature the college uniform.

I hope that one day Geno gets another chance at being a starting NFL quarterback. I really want him to go to the Rams so he can throw to Tavon Austin and Stedman Bailey. 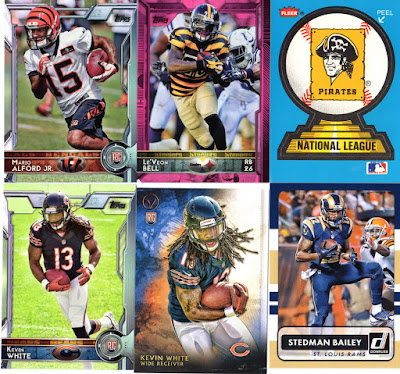 Jeff has sent me a few Kevin White's over the past few months which is greatly appreciated. I still haven't focused too much on him myself so I need all the help I can get.

It was nice to see Stedman Bailey get releases from the hospital. In case you didn't know he was shot in the head in Florida over a month back. Miraculously he survived and has already been released.

Thanks for always hooking me up with unique cards Jeff. This was a nice bolster to my WVU collection.

Thanks for reading!
Posted by BobWalkthePlank at 3:29 PM