Korea By Way of P-town

Tom is a constant help with my Pirates collection.  About once a month I receive an envelope of various sizes full of good stuff. This particular envelope was small in size, but packed a punch. Overall this probably marks our 10,000th trade. Actually I'm not sure how many this makes, but we like to trade! 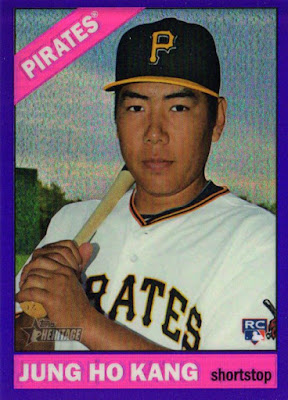 Of all the current Pirates, Jung Ho is by far the least represented in my collection. His first few cards were through the roof on eBay more because of the novelty of him being the first position player from the KBL to transition to the MLB. To a lot of peoples surprise Jung Ho turned out to be a good player and his cards went up even more.

Do they call these something other than purple refractors.  How about Purple Nurple parallels? Whatever they are called they are very shiny and quite appealing. 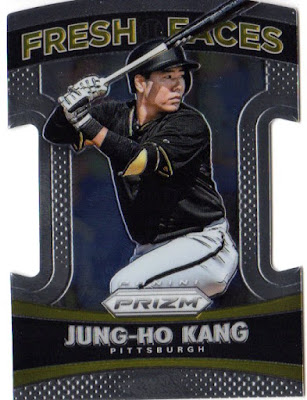 Pirate cards still hold up pretty well without the license.  I guess the Pirates aren't too worried about his recovery from a torn MCL and a broken tibia thanks to freaking Chris Coghlan. They felt confident enough to trade Neil Walker and word is Kang should be ready at some point in April

Baseball is weird.  They stop collisions at home plate but you can destroy a guy to break up a double play. In all seriousness I actually got tired of hearing the Pittsburgh media bitch and moan about this play.  One thing I was happy about was that the Pirates didn't hit someone during this game.  That could have gotten really nasty. 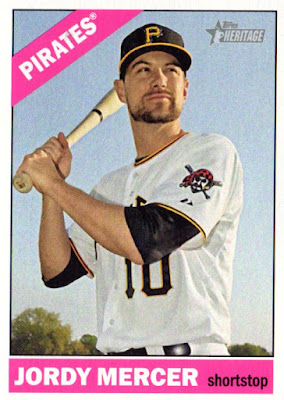 Jordy had lost most of his playing time when the Pirates were firing on all cylinders last year as his bat took a big step back last year. He played pretty well after Kang's injury.  At least for the start of the upcoming season he will be slotted back in shortstop and Kang will play third when healthy. Of all the starters, I'm guessing Jordy will have shortest leash. 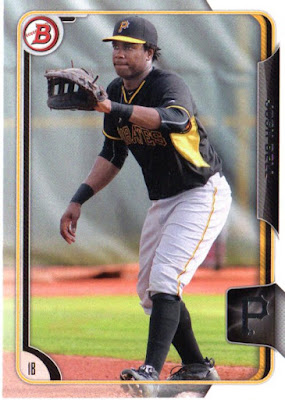 Quite a bit of speculation when Bell might be available to help out this year. The Pirates weakest position is by far first base, but Bell barely has any AAA at bats.

Thanks Tom for the great cards, especially the Kang's. I'm slowly accumulating some of his stuff now. His autos finally dipped in price some as he was featured in just about every set from June on. Maybe I'll buy one for myself for Christmas.

Thanks for reading!
Posted by BobWalkthePlank at 8:37 PM