It feels good to sit and relax. After a whirlwind Christmas full of family gatherings things are getting back to normal. I took off work today which means I'm done until Monday! Have all kinds of fun stuff planned as one of my good friends is coming in from DC to stay with me tonight. We are going to sample a bunch of beers, hit a local brewery taphouse and watch some football.

Now to something even more exciting... 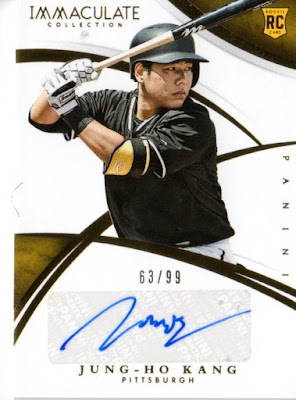 Patience finally paid off for adding a Kang auto to my collection. For the longest time his autos were outrageously priced, but he eventually signed enough cards to help bring the price to a more respectable amount. This card set me back just less than $20.

For as long as I've collected the Pirates their really hasn't been a comparable to Kang in terms of cardboard prices. Being that Kang was the first position player to make the jump from the KBL I was expecting high prices. The thing that caught everyone by surprise was how good he turned out. This caused even more price increases. Pirate players that come up in the system generally have lulls in which card prices fall. Even stars like McCutchen and Cole had times where it was a buyers market. Kang immediately went to Pittsburgh and prices reflected that.

It will be interesting to see how he does in his sophomore campaign. He'll have an extra challenge of returning from a broken leg and MCL tear as well. Generally speaking the second year in the league is hard on hitters as pitchers adjust and have better scouting reports to exploit weaknesses. What Kang did last year was a huge bonus for the Pirates, but expectations will be much higher this year. If he struggles that would open the opportunity to purchase more cards, but if he succeeds Kang has a chance to price himself into the stratosphere. For the sake of the Pirates I hope he prices himself out of my collection.

Posted by BobWalkthePlank at 6:28 PM