I was prepared to make this post live around 6:30, but instead I got caught in a marathon session of Old MacDonald with my daughter.  It was quite the rendition complete with realistic animal sounds and multiple encore performances. We stopped as soon as my wife started recording. 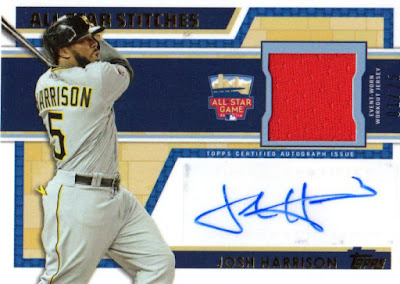 Frequently I talk about finding the perfect time to start pouncing on autographs on eBay. Sometimes it is better to strike early while other times patience is key. Buying Cutch early was a smart move, Brian Bixler not so much. The prospect game is a tough one to play.

Where things get easy are on late bloomers. Josh Harrison was a feel good story back in 2014 and was arguably the Pirates most valuable player not named McCutchen. Since Harrison wasn't much of a prospect, card choices were thin up until the breakout. So when the first autos hit the market prices were through the roof. Harrison autos were selling higher than the likes of Gerrit Cole and Starling Marte.  Yikes!

So the obvious move was to wait.  Every so often this can bite you in the ass, but for players with Harrison's skillset and pedigree they rarely take that next step into cardboard stardom. Sure enough with him being featured in more sets the prices came down drastically. The above card which would have easily fetch $40-60 at release time was secured for about $13.  Even that price is on the high end for a Harrison auto, but the All Star relic/autos carry a premium. Over the last few months I've been adding autos in the $5-8 range.

Now back to it.. EIEIO
Posted by BobWalkthePlank at 9:51 PM