Today is the first day I haven't worked in two weeks. It was nice to have a day of nothing whatsoever going on. So after vegetating on the couch for a few hours I have moved to messing around with my cards. I've been scanning like a madman to get trade posts ready for a bunch of you.  So many great cards came in this week!

In other news a buddy of mine and I booked a trip to San Diego to watch the Pirates/Padres series. We have been trying to book a road series for quite sometime, but finally this year the stars aligned and it worked out.  We will be going to all three games and should be able to hit several breweries. I'm pretty excited. 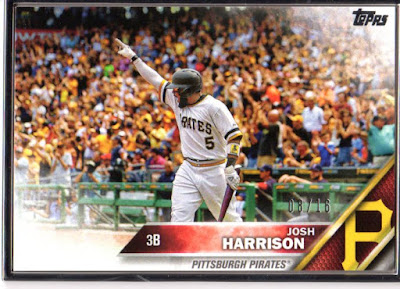 I've received a good bit of 2016 Topps via trade, but this Harrison is only the second card I've purchased myself. The first being a silver frame of Neil Walker. Of course my two favorite Topps parallels are two of the hardest to secure in the silver frames and clear acetate.  For some reason Topps lowered the print run on the silvers 20 to 16 which has been noticeable in the final price.

Now even the role players and bullpen guys will go off for more than $20. As usual with eBay though, persistence/patience pays off. I was able to purchase this Harrison for around $14.  The last card I would really love to have out of Series 1 is the Cervelli silver.  I let two out of my grasps because I forgot to put bids on and of course both sold for less than $15. With cards numbered this low sometimes you can go several months without seeing another one hit. Hopefully I'll be more on the ball.

Thanks again for all those who have sent cards this past week.  I think I'm holding stuff from GCRL, Play at the Plate and Too Many Verlandrs. They arrived safe and sound and will be posted this week.