Hope everyone is having a nice Easter weekend. Pretty nice day in Morgantown as the sun was shining and the temperature was in the mid 60's. Actually heard some lawnmowers today.  I'm guessing people didn't look at the extended forecast as it looks like it might snow next week. Yuck 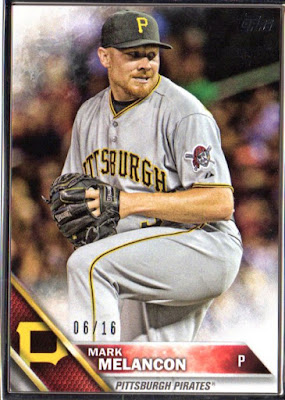 I'm always excited to add a new silver frame. I would love to add some of the bigger names like Cutch and Cole, but the prices are outrageous. Fortunately the second tier guys can still be had for good prices. Such was the case with Melancon. This one cost right around $15.

Melancon is one of the games more dominant relievers but he gets the job done in a much different way. Instead of blowing fastballs past guys he relies on a cutter that he learned from Mariano Rivera. Pretty good teacher. This plays in perfect with the Pirates shifting their infielders as the cutter induces weak contact. If you are going to beat Melancon you will have to string together several hits in a row. In his three years as a Pirate he has only given up 7 homeruns.


Posted by BobWalkthePlank at 11:13 PM