Panini Select is one of those sets that I pretty much ignored. It was basically Prizm without the nice checklist. As most of you know I don't let the non license issue stop me, but this set didn't have much going for it. Even when the boxes were discounted to a fraction of the original price I still passed.

The only signer in the set that peaked my interest was Justin Wilson.  No matter how bad the set if an obscure Pirate is in it, I want it. 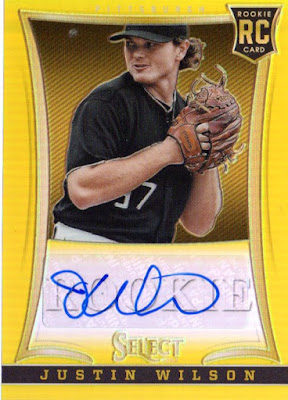 The base autos leave something to be desired so it was nice to locate the gold variation. At least it has a little pop to it. It is always exciting to find obscure parallel autos of middle relievers!

Wilson was a serviceable middle reliever for the Pirates for a couple of years. Last offseason the Pirates sent him to the Yankees for Francisco Cervelli.  The deal worked out fantastic for both teams, but it was extra sweet for the Pirates. That offseason the Pirates had already lost Russell Martin to free agency and were in dire need for a catcher. Thankfully Cervelli put together his best season as a pro and was a key component  in the playoff push. You have to like any trade of a reliever for a position player.

Thanks for reading.
Posted by BobWalkthePlank at 10:41 PM