I've spent the last couple hours sorting through cards to send to some trade partners. I love Sportlots, but receiving a million envelopes in a week can make some sorting nightmares. Hopefully by the end of the week I can have a mass mailing.  Also, I'm down to 3 trade packages to showoff. So Brian and Jeff I will get to yours soon and John I'm still sorting through your monster box.

In the meantime check this bad boy out. 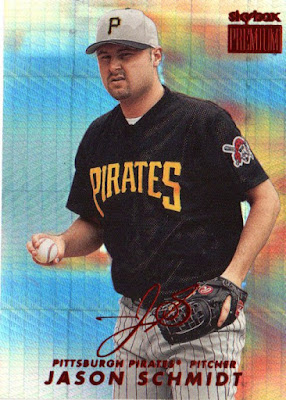 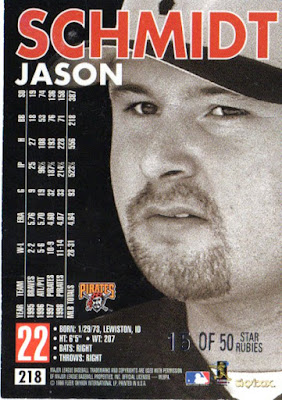 I'm always way too excited when I win late 90's early 2000's parallels. They take some time to track down and the prices can be all over the place.  The bad thing is when they show up you are best advised too take a stab at winning them because you never know when the next might hit. That can lead to overpays.

The seller of this card is a guy who has been liquidating his Pirates collection the better part of the last year. It had been a while since I purchased off of him, but his last wave of auctions had several cards I was interested in, with this Schmidt being the big get. While I overpaid for this card (~$8) I was able to secure some other good cards at better deals and at a nice combined shipping rate.

You have to love the Star Rubies cards. They are much shinier than the scan can show. Hopefully I can find a few more Pirates from this set.