Death, Taxes and Trading With Too Many Verlanders

This was suppose to go live yesterday, but the extra inning Pirate game completely threw me off my schedule.

This marks the 15th time I've received cards from my collecting doppelganger Dennis of Too Many Verlanders. Our only difference is that he is much more organized. At one point I tried to come up with detailed lists of what I have, but it was too daunting of a task at this point in my life. My compromise was creating links to players on the main page of the blog that showcases cards that have been featured. It will never be a truly accurate listing of what I have, but at the very least it provides a living document that can provide a glimpse to the type of cards in my collection.

I've pretty much settled into passing along newer Tiger cards to Dennis while he continues to hit all aspects of my collection.  Check this out... 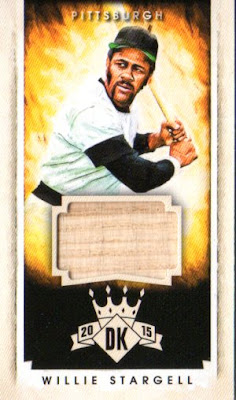 While this is a mini it packed a big punch. Obviously any type of Stargell card gets my attention, but a mini relic packs an even bigger punch. The Diamond Kings set was one of the best value buys in 2015.  I opened multiple boxes because the price point and content was fantastic. It yielded two of the nicer looking cards from any box I opened last year. 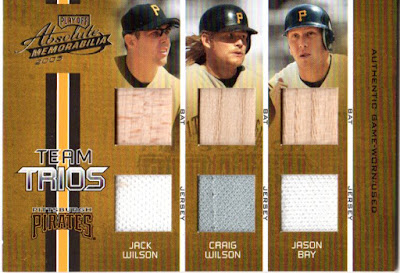 You will go crazy trying to find every parallel in Absolute Memorabilia, but I loved this set.  It was nice to see the likes of Jack Wilson and Craig Wilson get some cardboard love. 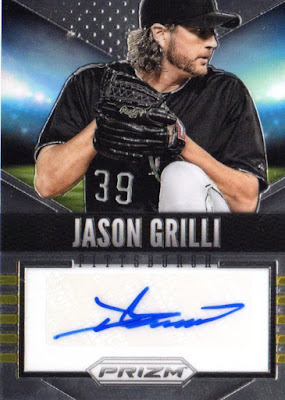 Jason Grilli is one of many pitchers who have revitalized their career in Pittsburgh.  It is always cool when relievers get some cardboard love. 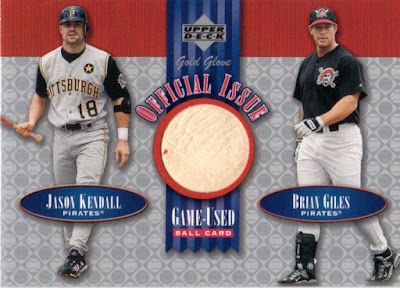 I talk about Brian Giles all the time.  He was one of the more underrated players of the early 2000's. In his 4 full season with the Pirates he averaged almost 6 WAR.  Tough to get noticed when you play on shit teams during the peak steroid era. 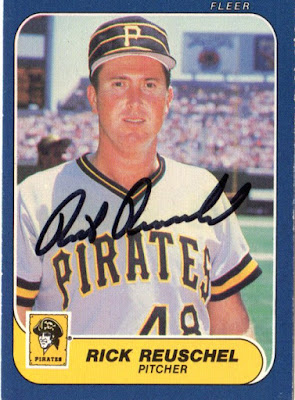 Rick Reuschel had an interesting career. He was a beast with the Cubs early in his career then injuries cost him the better part of 4 seasons. He came to the Pirates in his age 36 season and revitalized his career. This is a cool IP auto! 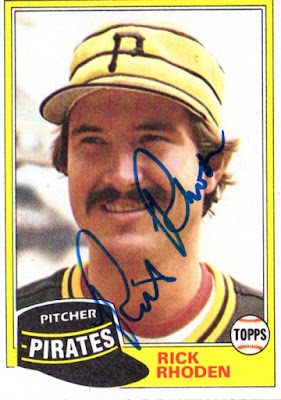 I wonder if they gave Rhoden a World Series ring in 1979.  He only pitched 5 innings. 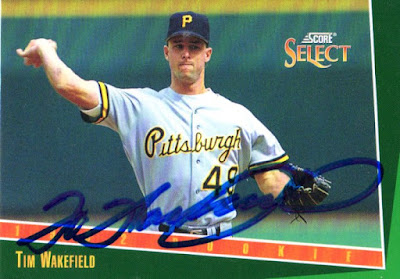 I was really excited to see this card in the stack.  Wakefield started his career in Pittsburgh, but for obvious reasons is remembered for his tenure in Boston.  Pretty cool that an auto on a card from his Pittsburgh days. 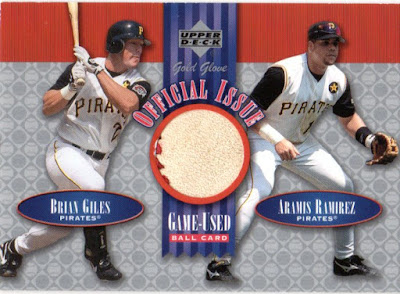 It was cool to see Ramirez end his career in Pittsburgh. I'm still trying to find some Pacific cards from his early years in the Burgh. 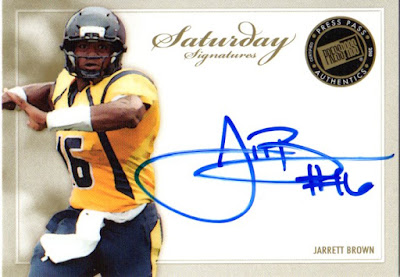 Jarrett Brown never saw any time during his short pro tenure, but that didn't stop card companies from putting him in a decent amount of sets. In the early 2000's Brown's only chance for autos would have been in sets like PressPass and Sage, but as everyone knows auto checklists are about 10 times longer so fringe prospects like Brown get much more love.  Either way I love cards that feature the college uniform so PressPass has long been a favorite of mine. 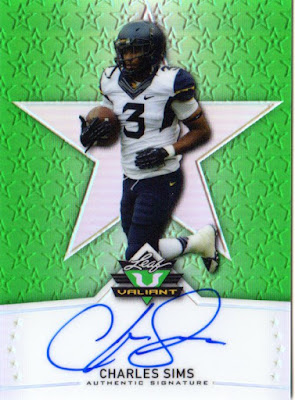 Charles Sims has quietly become a productive player. He had over 500 yards rushing and receiving as a backup to Doug Martin. 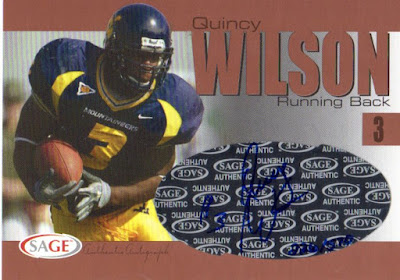 Sage was always frustrating because their stickers took away from the actual signature. 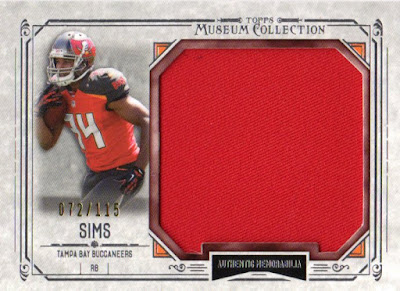 One cool thing about collecting Sims is that you are guaranteed some colorful jersey swatches with the Buccaneers colors. Always nice to get a high end set like Museum Collection in trade. 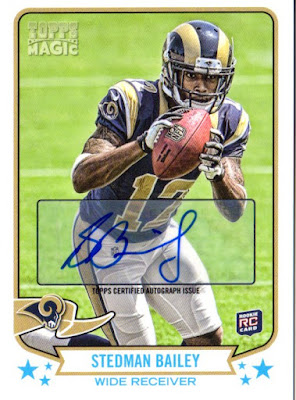 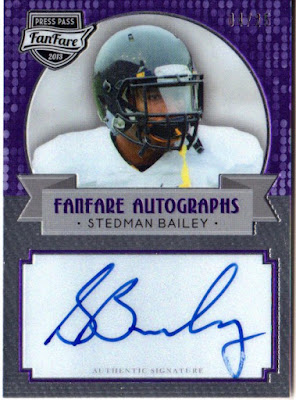 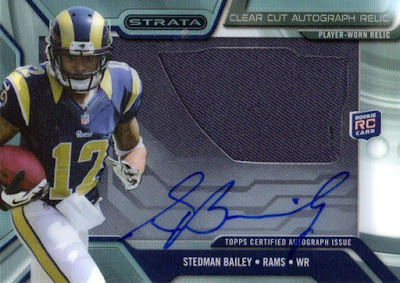 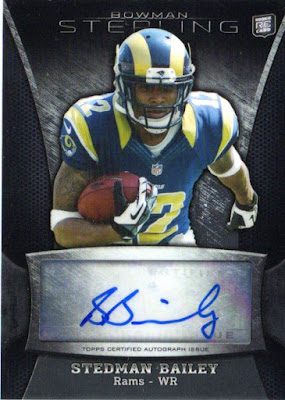 The WVU love continues with 4 Stedman Bailey autos!  If you recall Stedman Bailey was shot in the head in Florida around Thanksgiving last year.  The fact that he survived was a miracle, but even more so that he is already working out at full speed.

Man I wish Geno Smith would have been drafted by just about anyone other than the Jets.  At the time the Jets had completely overhauled their roster and he was forced to start from day one. Recipe for disaster. 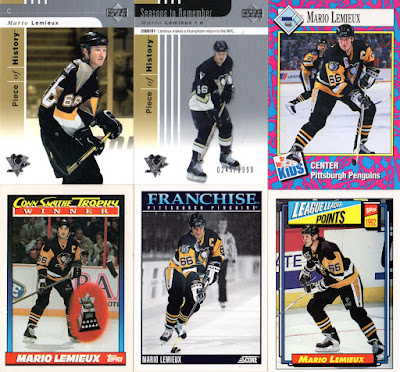 I'm a huge Pens fan, but only accumulate cards via trades. Always nice to receive cards of #66. 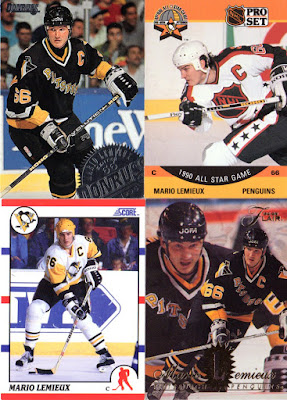 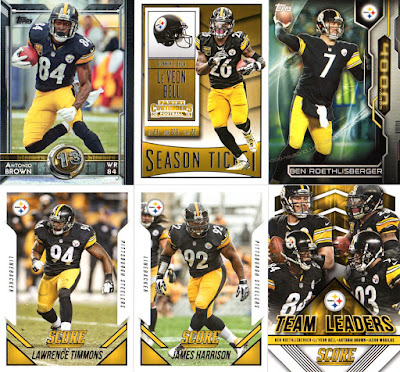 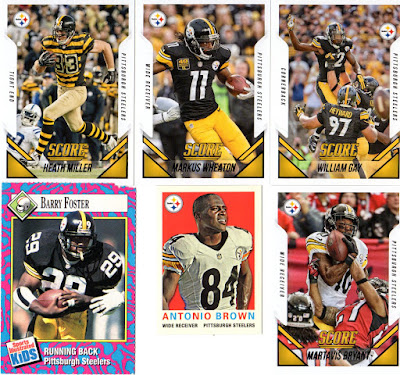 SI Kids!!!! Do they even still make SI Kids? Getting that magazine was a must when I was young. 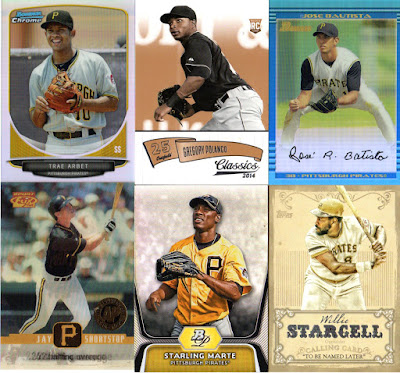 The Jay Bell card is my favorite. He left Pittsburgh right before the auto/jersey card boom of the late 90's so cards like this are as good as it gets.  I'm hoping he gets a Fan Favorites auto in the Pirates uniform at some point. 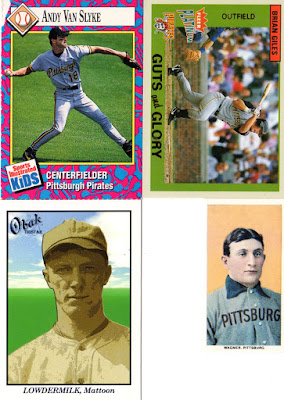 More SI Kids!!!! Andy Van Slyke was by far the most loved Pirate in the early 90's teams. Bonds was the best player, but people just gravitated to the outspoken centerfielder.

Once again Dennis you managed to blow me away. You pretty much covered every area of my cardboard collecting habits. Looks like it is my turn to fire back!

Thanks for reading!
Posted by BobWalkthePlank at 1:45 PM

Email ThisBlogThis!Share to TwitterShare to FacebookShare to Pinterest
Labels: too many verlanders, trade 2016