Framing Marte and Back from San Diego

I'm finally back from San Diego.  Looking forward to being back in the loop of baseball cards. I should have most of the day tomorrow to get caught up as my wife is taking my daughter out of town to visit a friend. FREE DAY! I'll have plenty of pictures to share soon.

I've been active adding silver frame and acetate cards since early last year. What has been lacking was finding a good deal on a more prominent Pirate. 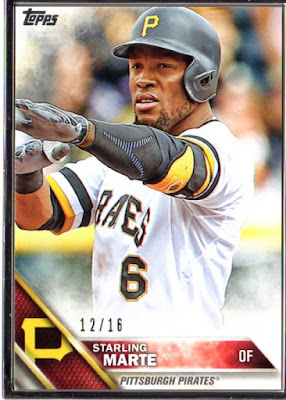 This was an exciting addition.  I used my eBay Bucks to pay the majority of it so the cost out of pocket was less than $10 bucks. I had pretty much wrote off the likes of Marte, Cole and Cutch, but like most parallels the prices can be all over the place.

I was a little pissed I missed out on a Cutch that went for a reasonable price this weekend. The selling price was right around $40 which is way too much for a parallel, but I had a gift certificate for $25. That would have been a great opportunity to snag a card I would normally not even try for.  It will pop up again....hopefully.

Posted by BobWalkthePlank at 6:57 PM