The Worst Part of Stadium Club 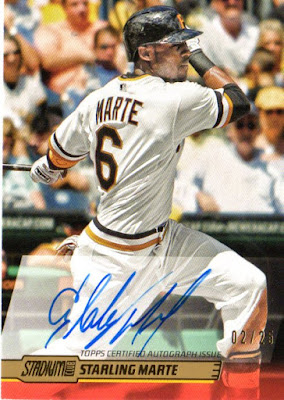 2014 Topps Stadium Club Starling Marte Gold Auto /25
Everyone loves Stadium Club and rightfully so. Once the price came down on the box price it was one of the more fun breaks in the last few years. It was refreshing to have a set where you actually want to look at and collect the base set.

My only complaint was with the auto distribution.  Between the boxes I opened myself and ones I witnessed it was some of the worst collation I have ever seen.  I swear I saw a thousand Dean Anna autos pulled. It was crazy. Of the boxes I opened, Mookie Betts was the only notable player I pulled. I opened a lot.

To eBay I went....  I already had the base Marte in my possession. For whatever reason it sells super cheap. I expected to pay a decent amount for the gold version, but like the base it sold for less than $10! Not to shabby for an on card auto.

Now I will say the gold parallels don't look that much different than the base. Maybe that hurts value. The only difference is the nameplate is in gold. Maybe I like late 90's parallels too much and expect crazy holograms, lines and so forth.  Either way it is a nice auto of Marte for cheap. End of story.

Thanks for reading.
Posted by BobWalkthePlank at 7:31 PM