Swing and a Pop-Up

Today my wife and I spent most of the day in the basement getting rid of junk and moving stuff around to better utilize the space. The silver lining is that it will free up more space for cardboard and beer! I'm not sure if my wife knows that yet........maybe we'll keep that on the down low. It is amazing how much stuff you can accumulate by having a kid.

Early this week I received a piece of mail from Bert of Swing and a Pop-Up.  While Bert is not blogging as much these days he is still commenting and trading.  While this package was small it packed a big punch. 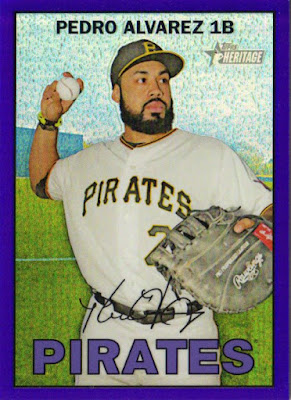 While the Pirates were completely justified non tendering Pedro Alvarez it is still weird seeing him play for another team. Pedro was Neil Huntington's first big draft pick and he and McCutchen were supposed to be the guys to bring relevance back to Pittsburgh.  While he showed flashes it really never came together for Pedro. The power was some of the best in baseball, but his defense and inability to hit left handed pitching made him a one dimensional player. 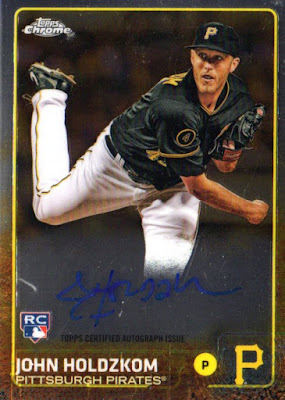 John Holdzkom was an unsung hero two years ago for the Pirates during their playoff push. He was found playing independent ball by a Bucco scout and was immediately signed and sent to the minors. After a small tweak in his deliver he became super dominant and ended up being a backend reliever down the stretch.  Unfortunately arm troubles began the plague him and the Buccos had to DFA him to make room for three non roster invitees that made the team this year.

Chrome autos always scan like crap, but you can see that John has one of the more unique autos out there. Such a cool card! 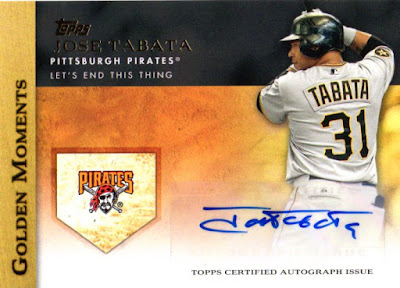 Over the last handful of years the Pirates have been very good about signing young talent to long term extensions. So far the only deal to go south was Jose Tabata. When Jose inked his deal it was universally praised in the media for being super team friendly.  Well, it went south real fast.

When Jose first got called up with the Pirates he showcased great plate discipline to go along with plus speed and gap power.  After signing a 6 year deal in 2011 Jose's career began to fall almost immediately. Hamstring injuries slowed his running game and his power was completely zapped. Essentially all his tools that made him a valuable prospect were gone. From the time he inked his deal Jose would be up and down from the minors until his trade to the Dodgers last year.  The Buccos received Michael Morse which was essentially a bad contract for bad contract trade.

In terms of cardboard I was pretty active in trying to acquire cards of Tabata. I actually just made a purchase yesterday off of eBay! Thanks to Bert I was able to add a nice copy of this 2012 Topps Tabata.

Thanks for the great cards Bert. I'll hit you back soon with some more Red Sox.

Posted by BobWalkthePlank at 9:08 PM

Email ThisBlogThis!Share to TwitterShare to FacebookShare to Pinterest
Labels: swing and a pop-up, trade 2016